How. How did rookie TJ Oshie score the game-winning goal in the third period at Dallas Thursday nigh?

The North Dakota alum was basically alone on the right side, just him and Dallas goaltender Marty Turco. And it wasn't like Turco was out of position. He came out aggressively to cut down the angle. Turco had the bottom of the net covered, the post wasn't open. The only space Oshie had to shoot was right by Turco's left ear and into the top of the net. And that's exactly where he put it, making the Gatorade bottle jiggle.

Here, see for yourself. 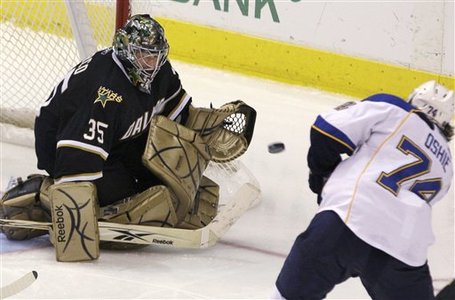 What a goal. What a game.

We'll have more later tonight and in the morning, but feel free to fill up the comments with your WTFs and such.

Did I mention the Blues are three points out of the playoffs?