Share All sharing options for: Putting Dallas Win In Perspective For Blues

After the Blues pulled of a thrilling, exhilerating and somewhat convincing 3-1 win Thursday night at Dallas, Gallagher and I decided to trade some e-mails and turn it into a post. Below is a screen grab of the telecast on FSN. On the Blues sign on the left, look for a sticker with a certain drooling hockey player logo. 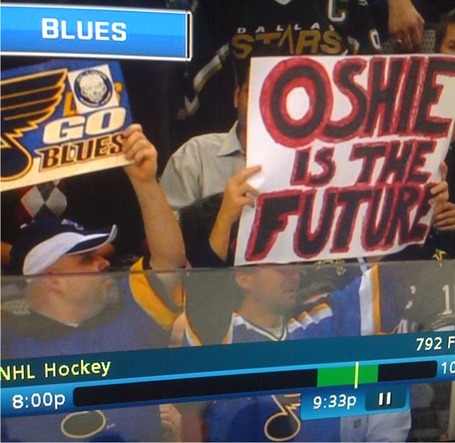 Yeah, that was pretty cool. Thanks fellas.

Brad Lee: So I heard somewhere that Oshie is the future. But beyond that, it’s honestly amazing the Blues are in this position, just three points out of the final playoff spot. The last two seasons the Blues have tried to get into the playoff conversation. And each year it’s been a short talk. The Blues have been pretenders, a team just good enough to get noticed but not truly dangerous. Not this year.

First difference with this team right now at this point of the season: the forecheck. It’s tenacious. They keep coming in waves. And when you see guys like Brad Boyes following the lead of David Backes and Brad Winchester and TJ Oshie, you know it’s infectious.

Sean Gallagher: Infectious like my rash. At this point, Oshie could rape the mayor under the Arch during the VP Fair and still probably get a key to the city like two weeks later. Slay would still be all bitter, but you know he'd have that patented fake/forced smile on his mug. You know the one, in the business it's called The Gary Bettman.

But seriously, how many times did your heart stop during that flurry during the third period when the Stars had like 52 shots in 52 seconds?

BL: Every time the Stars hit the post, I thought it was going in. They had 42 shots, but that doesn't count the crossbars or posts. Goalie Chris Mason was breathless after one of the exchanges. His heart was definitely stopping.

In the post-game interview, Jim "The Cat" Hayes asked Oshie about being reunited with linemates David Perron and Patrik Berglund. He said he was happy to be back playing with them.

"When we’re playing good, it’s fun. Sometimes we’re not going like we should be. But tonight it was fun going back with them."

SG: Best part of the interview is when Teej was asked, do you like playing with those guys? Most pros will say, "I'll play with whomever coach thinks I should play with" or "I just try to go out and play hard and work with whoever else is out there." (And yeah, that premise assumes that professional athletes know when to use 'whom' instead of 'who' but whatever.)

The Osh? That kid isn't taking the easy road. Do you like playing with those guys?

The kid gives us another reason to love him almost every single game. He never takes a shift off, he can bury the sick goal, he can freight-train a guy. He plays the pee pee, he plays the kill. And yes, he can rape the mayor if he feels like it. But it's strictly a power thing.

Whenever Backes wants to stop being this team's Chuck Norris, the Teej will gladly accept the title. Speaking of which, at what point does the team break the rivets off of the C on Brewer's chassis and make Backes the captain of the Blues?

BL: It will be interesting to see if Brewer is ready to come back at the start of next season. There are reports on the Interwebs that Brewer has stopped skating because of lingering pain after his back surgery earlier this season. Who knows when or if he'll be ready to play again. So I would think a captaincy change could come as early as the fall.

It is weird that this team is showing a ton of heart and determination on the ice without their captain. Sure he's around off the ice, but I would doubt he's traveling. How important is having a strong captain on the team when they can do this without him? There are emerging leaders like Backes, Oshie but also Jay McClement. And how big a role does Keith Tkachuk have on this team. He easily has the biggest personality on the team. He's accomplished the most and is an acknowledged big mouth. They trade him, they risk fucking up the team chemistry big time.

Right here, right now, what do you think the Blues should do at the deadline?

SG: I'm as caught up in the playoff race as anyone. I'm as excited about watching these guys play as anyone.I'd love to see them get into the second season as much as anyone.

But it isn't about just this year. This is about the franchise and building it to become a dynasty. Getting slaughtered in five games by the Sharks can teach the youngsters a few lessons. What does it teach Tkacuk?

If the best offer the Blues get for No. 7 is a 3rd round pick and a future third-liner kind of prospect, you keep Tkachuk. If someone offers a high pick and/or a promising prospect, you do it.

Again, it's easy to get caught up in the playoff chase; we all want it to happen. But what happens when we get there? I'd rather be better set to demolish opponents in three years and beyond than to be 'hoping for a miracle' this year. You never know, they might get the best of both worlds anyway if you trade away Tkachuk and/or some other expensive vets (Hinote, I see you hiding back there).

Color me unsurprised if the Blues make trades and then try to spin the "we can still make the playoffs" story. That's what I'd do.

BL: I love Ron Caron. The man had balls in the front office that have been unmatched in St. Louis sports history. And I think he would be afraid to make a trade right now.

Ok, that was bullshit. But I am convincing myself that Tkachuk isn't going anywhere, primarily because of the no trade clause. So he'll be here. They may try to add a guy. You and I have talked about the cash flow over there at 14th and Clark. You know they could use a couple big paydays where the games are sold out, the ticket prices are increased and the beer is flowing. The business side of the game has to enter into the equation at some point.

And John Davidson said it in that conference call we wrote about. He wants to give the fans and the players on the team hope that they can make the playoffs now. With the way this team forechecks and plays defense, who knows what would happen.

I'm not sure when you adopted the prospect guy mentality, but I think a playoff spot would be huge for this franchise and the fanbase. The Rams suck. The Cardinals could be better, but they're far from a lock for the playoffs. Go after it, man.

Last topic from me. Phoenix lost a huge game at Nashville tonight. They have to be upset at the loss here in St. Louis on Tuesday. What happens in the desert Saturday night? Other than Janet putting money on St. Louis. Allegedly.

SG: Dude, you're pretending like Phoenix cares about anything. The Phoenix/Winnipeg franchise is the Chicago Cubs of hockey. The only difference is that the Cubs actually won a championship. Back before the NHL even existed, but still. The organizational mentality is a crushing wave of negativity. They play in front of an empty arena at home, they get no media coverage and their best defenseman got the shit beat out of him by Matt Walker. The Coyotes are a weak team in a franchise history of flawed teams and even Gretzky himself, captain of multiple teams but never known for his rah-rah speeches and "when the Germans bombed Pearl Harbor" motivation can't save this team.

Their terrible road trip is a turning point and they'll be battling the Avs for dead last in the West before this is over. Blues roll saturday. Book it.

BL: Oh my God, I hope there are no players who read this thing. They'll be in a Scottsdale establishment until the sun rises Saturday morning. They get two points, that's all I care about. And yes, I'll be drinking heavily.