Share All sharing options for: Another St. Louis Goalie Makes The NHL

Maybe there's something in the water here in St. Louis. Or maybe just a higher percentage of crazy people than in other cities. Either way, the St. Louis hotbed of NHL prospects has yet another one of their own make the list of current NHLers.

Mike McKenna, a St. Louis native and one-time draft pick of the Nashville Predators, has been called up to the Tampa Bay Lightning. He will probably start off as the back-up to the starter-by-default Karri Ramo. 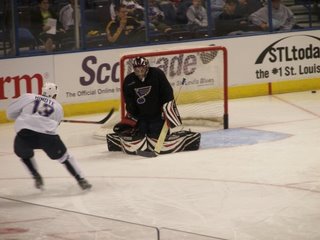 McKenna stops Dan Hinote during the Blues FanFest in 2007. He was on a tryout with the Blues at the time.

McKenna was actually signed off the AHL Norfolk Admirals' squad as he wasn't under contract to the Lightning beforehand. Tampa has lost Olie Kolzig for the season due to surgery on his arm and then lost starter Mike Smith to some sort of weird self-inflicted injury during a hallway temper tantrum.

McKenna, who played for the Junior Blues and for St. Lawrence University before turning pro, was written up by the Red Line goalie development camp last year. They felt then that he 'resembled Brent Johnson' and that his wide stance, ability to watch the puck all the way in and absorb shots made him a prospect to watch.

Now 25, McKenna hopes to not have to ride the pine, but to get into an NHL game to show what he can do.

Back in 2007, when he was on a tryout with the hometown club, he had kind of a hard time on shootouts:

First, Erik Johnson gets to hear the horn:

Ah well, maybe it wasn't meant to be with the Blues. But we'll still be pulling for the kid. Even if he is a crazy goalie.