The Blues come back home tonight after a short, successful road trip to Detroit (shootout loss that woulda, coulda, shoulda been a win) and Columbus (BJs sucked). They host the Edmonton Oilers, who at certain times this season have resembled something like this: 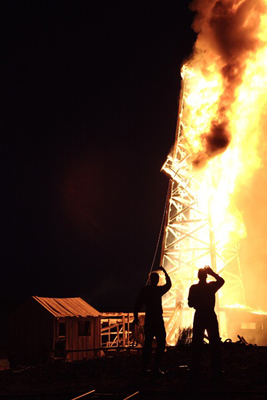 There was much conjection earlier in the season that the helmetless Craig MacTavish was just a loss away from the unemployment line. Instead, his team ripped off an awesome January with an 8-4-0 record. But they've absolutely struggled in February and are winless...in two games.

With the Oilcan struggling, it might be a nice opportunity for the Blues to break a five-game losing streak to the Edmontonians. Or Edmonites. Whatever. Teeeeej Oshie and David "The Punisher" Backes are both expected back on the ice tonight, according to Internet friend (we've never met) Jeremy Rutherford from Lee Enterprises' Post-Dispatch (buy they're stock, it's a bargain!). Rutherford has a nice nugget about Emmanuel Legace and Chris Mason, who is getting the start tonight. Again.

“If you start off the season in a bad frame of mind, it can just have a snowball effect,” Legace said. “If you can’t get it right, it’s tough. One little thing happens . . . you could be climbing that hill and one thing happens you’re right back at the bottom again. That’s all goaltending is. If you get in that right frame of mind, you could go on a two- or three-year string. I think that’s what I was on the last couple of years. Murphy’s Law has brought me back down to earth.”

Legace was asked what it’s like to see Mason getting the job done.

“That’s what Mace was brought in here to do . . . that’s the type of goalie he is,” Legace said. “He’s been in this league as long as I have. He’s played in some big games. That’s what he gets paid to do and he does a phenomenal job of it. He had a rough start and wasn’t getting the wins early, but he’s putting in a good string here, and that’s what we need right now. The guys are playing well and the goaltender is playing well. When Mace is playing that well, you’ve got to run with him. We’ve got to get in the playoffs here . . . I’m sick of sitting in the summertime and watching. I’m loving that he’s doing well.”

This is your GDT, your game day thread, your virtual playground to comment on the game, make jokes, post pictures, vent and basically fuck Detroit. Have at it. We'll see you in the comments.