You Write The Comedy - Celebratory Edition!

Share All sharing options for: You Write The Comedy - Celebratory Edition!

So the Blues are almost, kind of officially back in the playoff hunt. Sort of. They're five points out of the last spot as of this writing, but they're still in last place in the Western Conference. CUH-RAY-ZEE.

What's even more insane, they've captured points in nine of their last 10 games at a pretty impressive rate of 15 out of possible 20 points -- arguably their best stretch of the season so far. Helloooooo tease.

It was nice seeing the Blues not get down after being behind 1-0 after the first period. They came back and scored four unanswered goals. They got faster, stronger and better as the game wore on. It was sweet! And as we've talked about, this was a game the Blues could have lost since the Avs are barely ahead of the Note in the standings.

To celebrate, tell us what Bradley Boyes and Keith Tkachuk or even Peter Boo-dye are thinking or saying. 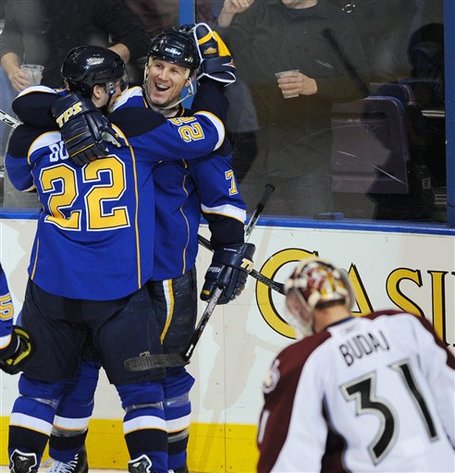