In A GT Daydream:Getting Some Crazy Shit Signed!

Share All sharing options for: In A GT Daydream:Getting Some Crazy Shit Signed!

The Blues had their Rink Tours promotion today and we had planned on going, but somehow that afternoon nap seemed more important at the time.

I've gone to this before and it's the main reason that the Son of GT calls Bernie Federko and Bill Guerin among his top three all-time Blues. Hell, Guerin asked him if his missing tooth was from a punch and offered to knock the other front one out for him. Made the fist and everything. 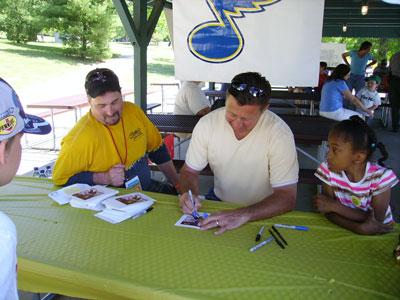 That's not a picture of my son on either the left or the right of No. 24, but you get the idea.

I'm a fan of this promotion. It's a huge sign that the Blues and their management get it. They know that meeting and greeting the kids and crazies and signing a few auto's will make for lifetime fans. They're right.

But that doesn't mean that we wouldn't mess with it, either.

Now, if our desire to do something funny for the website had outweighed our desire for some sweet, sweet nappy time, here's what we would have tried to get signed...

Brad Boyes: You love Boyes. We love Boyes. It's accepted by certain groups. Somehow I doubt he'd sign this. I also wonder if the cops would have pulled aside for a quick chat had we tried.

Carlo Colaiacovo: I'd crack up every time I look at it if I could have gotten him to personalize this picture, "Sometimes I can see the future! All the best, Carlo."

Erik Johnson: It's a little too obvious, but his signature on this picture would be sweet for posterity. Seriously, look at that form; the kid is gonna break an ankle. His contract needs to have a no-golfing clause.

Jay McClement: Look, I know the nickname Silent Jay is actually backwards, but he kinda looks like the one guy and seems silent like the other guy. I like to think he'd sign the Jay bobblehead.

Patrik Berglund: This would probably be funniest and easiest to acquire. This might baffle him, which would be great.

David Backes: He might as well get used to it with this crowd anyway; why not have Backes sign a sweet Chuck Norris poster.

TJ Oshie: If only this was a plate. Maybe just the picture would have gotten a reaction. Then ask him if he'll sing 'Wonderwall" for you. The ladies would swoon.

Dan Hinote: His wife's picture. Now I know this might have gotten me punched, but what if I'd promised not to wack off to it? He'd probably be cool with that, right?

BJ Crombeen: On second thought, I don't want to be carrying around a picture of the thing that immediately leapt to mind.

Cam Janssen: I just know he'd sign it, too. The guy thinks the penalty box is the stage at Chippendales.

Eric Brewer: Our regular Mr. Particle made this picture and it'd be sweet to add to the collection

Fragile Jay McKee: Another fan-made photochop, he'd have to sign it, right?

Sigh. If only my couch wasn't so comfortable on Sunday afternoons. Maybe next year.