Share All sharing options for: Crazy Time For Blues Fans

Any fan who saw this team competing for the final playoff spot this close to the trade deadline is either lying or should go buy a powerball ticket. In the paper, on this site, on messageboards on other sites, the guys who run this place all said the season was over in late December and early January. 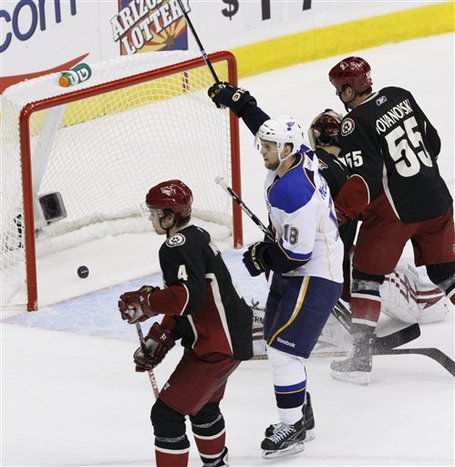 Gallager wrote on Dec. 29 about the issue of Blues fans hoping for the worst and doing some fan tanking. And then last night the Blues finished the evening three points out of the final spot. Amazing.

Let's get a few things out of the way and then we'll do some polling.

First, I think we should all be prepared to see Keith Tkachuk finish the season in St. Louis. No matter what you think of his career or his character or his physique, this Blues squad needs him. They need his big body and finishing skills on the power play. They need his voice in the dressing room. With his no trade clause, I don't see how they could move him.

We've gone on the record a couple times saying that we're not fans of the hockey rumor sites, especially any place that has to make shit up because people are paying for the information. But this little nugget is more interesting based on the context.

Over at ESPN The Web Site, Pierre LeBrun is blogging about the trade rumors. He leads off with Chris Pronger to St. Louis and says that the Bruins are no longer interested in the big elbow. Believe it or not, I don't care. But check out LeBrun's observation about the rumor:

That's pretty exciting stuff if you're a Blues fan. It tells you the front office believes the club is turning the corner and it's the right time to make this kind of deal. Obviously, Pronger, a former Blue, may end up elsewhere, or the Ducks may wait until the offseason to move him; but tell me you're not stunned to hear St. Louis is pursuing Pronger. Great stuff.

He's saying it's interesting that the Blues are coming back onto the league radar. And that is a very good thing, regardless of your thoughts on the prospect of Pronger returning to St. Louis.

Detroit comes to town on Tuesday. We're getting prepared for the madness. We expect and hope that this place could become a madhouse between now and Tuesday night. And we'll do our best to help make that happen.