Share All sharing options for: The Debate On IceGirls 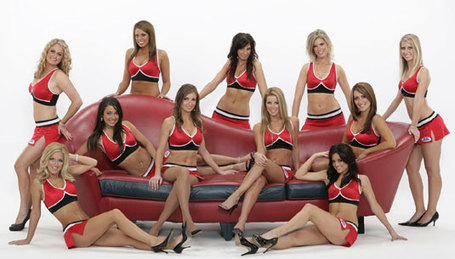 The Blackhawks' Ice Girls. Bill Wirtz never would have paid for this.

In fact, we came down on the issue a couple years ago when the Blues toyed with this idea. At the time, the team completely botched the deal. In our estimation, if you're going to have IceGirls, you have to go one of two ways (sorry, about the formatting, that post got trashed in our changeover to SBN): You can either pick cute little girls to do it or you can pick girls who will make their way over to the East Side for their 'other' jobs when their on-ice duties are over.

That's it, there's no other answer. The Blues, of course, split the difference and picked a bunch of girls who were too old to be considered cute and yet too young to be considered hot. It was a pedophile's paradise and it made all of the rest of us uneasy. Where are we supposed to look? At them? Away from them? These girls were in our heads and not in a good way.

The following year the Blues decided to tip the scales towards 'hot' (and no, I didn't post all those comments; yet another casualty of the SBN crossover). They even put up a video of the 'girls' getting ready for their tryouts. The result was so skanky that the entire program was scrapped and all proof that it ever existed was wiped from their site. Instead they chose in favor of the current youth hockey players who handle ice clean-up duties.

But tonight's foes, the Dallas Stars? Well there are no doubts about which way they've gone. Considering how many out-of-work cheerleaders there must be in that state, we're not surprised, but the emphasis on this group is really, um, something.

Now we can see both sides of the argument for how the Ice Girls idea should be handled, and really, our kid has to catch his first boner somewhere, so it might as well be at a hockey game, right?

But honestly, we see more value in not having 'cheerleaders' and skanky stripper Ice Girls and in instead putting more focus on youth hockey here in town. We have the Mite games during one intermission and the High School Shootout during another. Having kids scraping up the snow and ice shavings while wearing their team jerseys is a better idea to keep building up interest in the sport.

We gotta get the next generation of Cam Janssens and Yan Stastnys somehow, right?