The Stars At Night Are Big And.... Your GDT

Share All sharing options for: The Stars At Night Are Big And.... Your GDT

That crazy song about Texas used to work a lot better for the Dallas Stars than it does now. Back when they had Captain Twitchy Derian Hatcher to blast guys and Brett Hull was filling the goal rather than filling his belly up in the box where the co-general managers chill out. 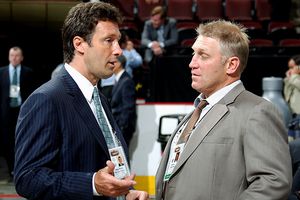 "I'm just saying, Hullie, my whole pizza was here, I left, I come back and you're here, but the whole pizza is gone..."

Back when Mike Modano was Mike Modano and Ed Belfour was BLEEEAAAARGGGHHHing his way across the NHL.

Back before Stars fans had to pretend that Brendan Morrow was going to be the next great player and before Marty Turco wasn't almost expected to crumble under pressure. 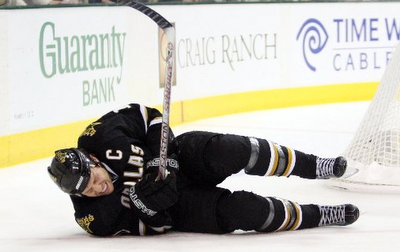 Morrow, who Stars fans love, has scored only 173 NHL goals in 591 games and averages about .65 points per game. He's out for the season after knee surgery.

Of course, the Blues have fallen a long way since those days, too.

Now both teams are outside the playoff picture looking in and tonight's two points could vault the stars back into the top eight or the Blues into the 11th spot, just two points out of the playoffs.

The Blues knocked off the Stars 3-1 in Dallas just a week and a half ago and beat them here in St. Louis 6-1 back in October when they had guys like Paul Kariya, Manny Legace and Eric Brewer in the lineup. This game is going to have to be more like the gritty, never-say-die battle that was won on Feb 26 if the Note really want these two points.

The game is at 7:30 and will be on KMOX for you old-schoolers, on FSN-Midwest for you traditionalists and hopefully someone will fire up an internet feed for you new-schoolers/out of towners.

If you want to see how the other half lives, check out Defending Big D. There won't be any commenter field trip tonight, as their readers didn't really appreciate our efforts last time. But you know, you can check it out if you just want to see how they feel about the game. Or why they love Brendan Morrow so much. Or Steve Ott. yes, they love Steve Ott. Weirdos.

That's all well and good and no matter how you follow the game, this is your Game Day Thread.