One Down, Three To Go

Share All sharing options for: One Down, Three To Go

Before this game a few of us were hanging around outside 14th & Brett Hull Way before "the downpour that would not be denied" arrived and we were talking about the homestand. The common feeling all boiled down to this: the Blues gotta win three out of the four to compete for the playoffs. 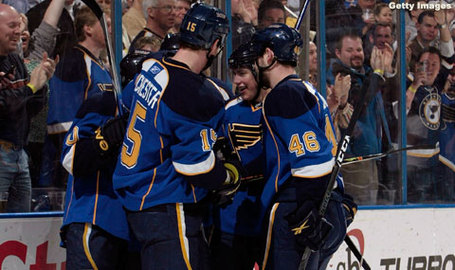 We need to see a lot more of this if this week is to be labeled a success.

The must-wins were Dallas and Minnesota because they're right in front of us in the standings. Then they have to beat either San Jose or Detroit, purely for the two points. On the first two teams, gotta win in regulation; the latter two teams, just get two points any way you can.

As we've all seen, it's tough to jump teams if you're pussyfooting around. Time for a win streak.

Well the Blues got it done tonight in commanding fashion. Dominating the Stars from the outset they did it all: big hits (McKee), early goals (Backes), fights (McKee, Janssen) and more goals (Perron, Winchester).

And that was just the first 12 minutes of game time.

A couple of back-and-forth goals in the second, the prettiest of which was created by TJ Oshie, King of St. Louis. The NHL's video system is down now, but we'll add the video when it becomes available. If you missed it, pretend like you did if anyone asks. It was that impressive.

Seriously, after that goal I told the guy next to me that it was 'awesome' about 15 times straight. Yes, TJ Oshie caused me to lose the power of speech. And his legend grows.

Beyond that, a few more notable notables about a great effort from the boys in Blue:

Next up: Sharks and their Blake-less, Nabokov-free lineup. We need points and those guys got 'em. Let's go get those points.