Hello and welcome to the game thread for the first period of tonight's tremendous tilt between your St. Louis Blues and...your San Jose Sharks? 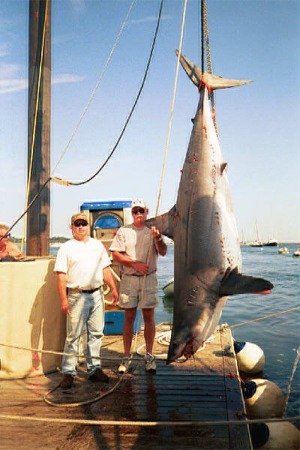 I tried photoshopping a broken hockey stick in it's mouth, and then I said, "screw that."

For the regulars, be prepared for a commenter field trip betwixt the Game Time crew (a.k.a. Sunshine Ministry's Alcoholic's Anonymous meeting) and the people who wear teal to more than gay pride events over at Fear The Fin. We'll be commenting here during the first period, over there at the second and then from the drunk tank in the third. Or here. Whatever.

I think the Sharks are fighting for the lead in the Western Conference, also known as "The Race To Win The President's Trophy And Probably Not The Stanley Cup! - sponsored by Circuit City." I usually don't look much higher than seventh in the standings, so I'm not totally sure. Maybe one of the Sharks fans can put down their white zinfandel and let us know for sure. The Blues meanwhile are knocking on the door of the playoff conversation, as long as they can push three or four other teams out of the way, not get their goaltender worn out or lose more than two games the rest of the season.

Don't let the standings fool you, the Blues have been playing better than the Sharks who have been hit by the injury bug. Look for The Waterboy, Brian Boucher in net. Claude Lemieux is out with a sore jaw. I figured him more of a ZJ-giving kind of guy. Chris Mason will start in net for the Blues because Rick Wamsley is still retired.

Patrik Berglund did not skate this morning because of back stiffness. It's from carrying the hopes of thousands of Blues fans on his back all year. Of course he's stiff. Lay off, people.

That's it. That's all the "expert" "analysis" you get. Don't wait to be seated, come on in and fill up them comments. At the end of the first, go to Fear The Fin.

And remember, it's fun to joke and give the other team's fans a hard time, but being a dick is still being a dick. Oh, and any wannabe Internet terrorists, these guys get us and what we do here. They're allies. So you're welcome to show up over there, but check your weapons of mass destruction at the door, ok?