Share All sharing options for: Chris Mason Shines In Spotlight

I don't know if you can say Chris Mason stole Thursday night's game against the San Jose Sharks, but they probably wouldn't have won 3-1 without his strong play. Media at the game and the San Jose TV broadcast both named him the No. 1 star. 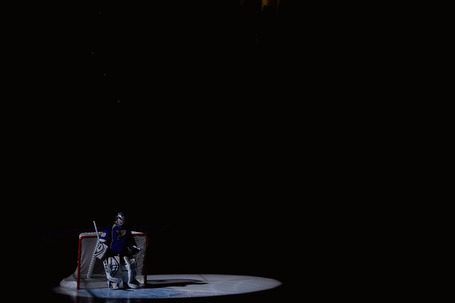 One is the loneliest number that you'll ever do...

The bald, bearded-one stopped 24 of the 25 shots the Sharks put on net. He stoned six of the Sharks' seven power plays on the night including a tripping penalty on Mayor Oshie with 80 seconds to play. The win gives him a record of 17-18-5 on the season after the horrible start to the year. The workhorse has started 18 games in a row and appeared in 23 consecutive games.  Where would the Blues be without Mason the last six weeks? Certainly not two points out of the playoffs. Six teams are within TWO POINTS of the final two playoff spots in the West. Insane in the membrane is what that is.

Up next are a pair of HUGE games against Detroit Saturday and then Minnesota on Sunday. Both are in St. Louis, so there's no traveling. But if you were Andy Murray, would you start Mason both games? Give us your goaltending philosophy and pats on the back for goaltender down in the comments.