Blues Take A Bite Out Of Sharks

Share All sharing options for: Blues Take A Bite Out Of Sharks

Thursday's 3-1 win at home against a banged up yet dangerous San Jose Sharks team that still has a lot to play for was as good as any this crazy season. 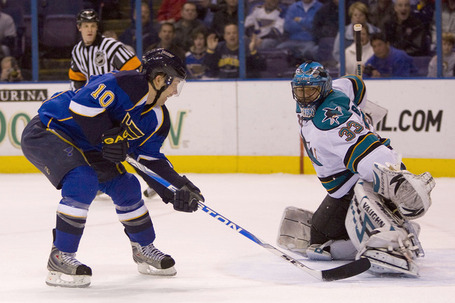 Pardon me while I score on this beautiful play.

While the Blues are fighting for their playoff life, the Sharks are shooting for the No. 1 seed in the Western Conference playoffs. Even with backup Brian Boucher in net and a handful of players on the shelf for injuries, San Jose played a tough, hard-nosed game. It was physical and intense. Nerve wracking. Stressful. You name it, this game had it as the Blues led 2-1 down the stretch. With 80 seconds left the referees called TJ Oshie for tripping giving the Sharks one last chance to win the game. They pulled their goaltender and Barret Jackman gave the Blues the insurance goal they needed for the win. Did I mention it was tense?

"Talk about an emotional game, physically draining. Both teams were hanging on with fumes at the end of the hockey game. That was a grind-out affair there. You were battling for space everywhere on the ice. There are a lot of tired bodies on both sides right now," head coach Andy Murray told reporters after the game. "I felt pretty safe when I saw that puck cross the goal line there making it 3-1. That was about the only time I started breathing again. I didn't know you could hold your breath that long, 20 minutes. It was pretty intense."

In the end goaltender Chris Mason stopped 24 of the 25 shots he faced. The players in front of the bald goalie kept the chances down the entire game and killed off six of seven power plays for the Sharks. Mason brought his record up to 17-18-5 after a horrendous start to the season that was hampered by surgery for his appendix. He's started 18 games in a row, appeared in 23 in a row. But with his aerodynamic head, he may be able to withstand the drain of playing every night.

"This is a busy part of the year for every team and it's no different for us," Mason told reporters after the game. "The guys have to play every night so there's no reason I can't do it too." Now that's a goaltender who knows the skaters on the team work as hard or harder than he does. There's a guy who understands it takes everyone on a team to win. Could someone e-mail that comment to Manny Legace? 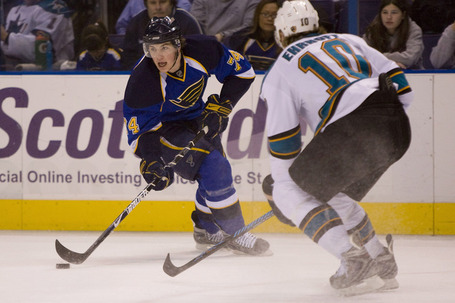 Hey little girl in the front row, look up. You're missing something cool. Me.

Listening to the interviews with players and head coach Andy Murray, you can draw a couple conclusions. The Blues have played well since January first, but especially well since late January. They've had to perform almost every night to keep in the playoff hunt. The Blues are one of six teams separated by two points for the final two postseason births. Even on a night when they win and don't give a point to a competitor in overtime or the shootout, Dallas, Edmonton and Minnesota all picked up at least one point. There's no chance at separation. The byproduct from that is a confidence that's been growing for weeks.

"We've played solid for the last month plus now so I don't think we're surprising anyone, especially ourselves," Brad Boyes told reporters. That's the kind of shit you want to hear from a team in the middle of March. You don't want to hear about teams struggling to find themselves or figuring out the work ethic it takes to win. The Blues have mastered that.

And to all the fans who think this push for the postseason and giving up draft position with every win, Mason has a message for you. "This is great. We've been doing this for two months trying to get back into it. Every game has that intensity. It is the playoffs for us, otherwise we don't get in. It's good preparation for when we do get there. We just have to keep going. It's the funnest part of the year playing games that mean something every night. It's unbelievable."

Maybe the Blues will make the seventh or eighth spot. Maybe they face a team like San Jose that they've played close all season, winning the series 2-1-1. Maybe they get to that bigger stage they haven't seen as a franchise since 2003-04 and realize it's not so different than what they've been doing for more than the last two months of the season. You never know.

But it will be intense.