[This story originally appeared in the Mar. 12 issue of St. Louis Game Time.]

I am a season ticket holder. Not one of the high-profile, large-dollar types, but a committed customer of the St. Louis Blues nonetheless. In fact, it's hard to be a full-season plan holder who spends less on tickets than me. I have two seats up in the cheapest seats in the building. And that's an upgrade from the last couple seasons because I actually have two seats now as opposed to the lone chair I had before. 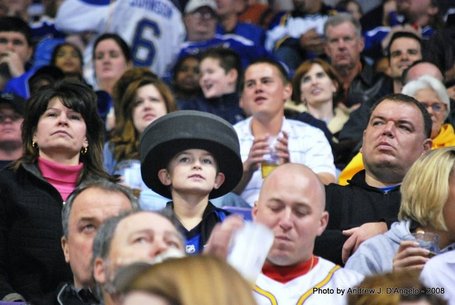 We actually don't mind the increase that much, we just want a little more love shown for the average fan.

But I've been a committed 41-game member of the team long enough to know what it means when I get an oversized envelope from 14th & Clark at this time of year: they're about to increase prices again. Of course, the arrival of the letter and the package explaining the increases was timed to hit my mailbox at about the same time as team majority owner Dave Checkett's public announcement in the paper that every seat was going to go up 10%.

I'm not here to defend everything the management and owners do with their franchise and honestly it's easier for me to be less upset than other people because the 10% increase on my seat comes out to a one dollar difference. And that's only if I don't renew early to lock in my current pricing. I know for a fact that my seats cost less than what Canadians pay to go watch junior hockey in most cases. My seats are cheaper than comparable seats in almost any other rink in the league. I don't like paying as much as I do, but most nights I get my money's worth on my entertainment investment.

But I received an email yesterday that instead took the price increase in stride and took the opportunity to bemoan the way the average ticket holder is taken for granted by the powers that be in St. Louis. The email said, "I'm not happy, but at least we can get our next year for this year's price. I figured we would just get soaked again. So the soaking is merely postponed.

"It is difficult, as even with current incentives, which don't apply to or benefit us, I still see a lot of vacant seats in the lower bowl.  As I told [a] Blues VP last fall ... I just don't really feel there is a real respect for the long term, loyal fan, or the non-corporate season ticket holder.  I'm not feeling the love."

I can agree with all of this. A lot of the effort is put into those who pony up the most money for their seats but who probably care about this team a lot less than those of us who are actually sitting in our own seats for 30 to 41 games a year. The high-dollar seats are often split by groups or used as entertainment write-offs by corporations who spread the tickets around to a lot of different people over the course of the season. That makes sense, of course, both for the purchasers and for the sellers, the Blues.

But should all of the best benefits really go to the corporate seats? My guess is that a lot of those benies go unused. Our email writer taps into the same emotion, saying, "People come to the game to see a good game, a winner, and really to have a good time. It's the legion of people like us who go to every game and add to the experience with battle cries like "JUMP!" or "How much time is left?" as well as people like Sean, Jeffio, the Red Berenson Cowboy, and even the Towel Boy and Cotton Eye Joe Guy that provide the experience.

"For some people, we are probably as much of the fabric of the game" as anything.

Again, I agree with that, having seen it first hand in my seats over these last few years I have been a season-plan guy. Although calling me out by name may be over-simplifying things as there are a lot of people who put this rag together to entertain the hardcore hockey fans, but I agree that picking up Game Time is a big part of the game for many people.

The emailer then goes on to talk about the average upper bowl season ticket holders as the team's Seventh Man. Now we may not be the Seventh Man to the players on the ice; they seem to react well to a big full house better than a mid-sized crowd full of fanatics, but I think management would do well to recognize the ‘average' season ticket holder, the non-corporate account holders, the face-painters, jersey-wearers, nacho-and-beer crowd as the franchise's Seventh Man. Advertisers and corporate accounts may pay big chunks of money to the team, but it's all of us smaller account people who will always be there for them.

In fact, my paperwork for next year is already filled out. Two more cheapo seats, please.