Blues Host Some Team From Michigan

Share All sharing options for: Blues Host Some Team From Michigan

We all know that everyone in the Blues organization and that everyone who considers themselves to be a Blues fan looks at today's game as a rivalry game. A huge rivalry game. Given the current state of the Western Conference standings, many might consider it the biggest rivalry game of the year.

But the Red Wings don't. 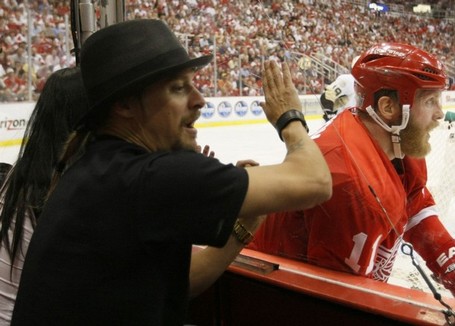 Not even thick plexiglass can protect Dan Cleary from a strain of Hep-C that strong.

The Red Wings players, franchise and fans look at this as more of an opportunity for big brother to keep little brother in his place again. The Red Wings have no respect for the Blues, no matter what they say to the media. They've had this team's number for so long that they expect to get two points every time they play St. Louis.

Even in the P-D today starting goalie Chris Mason mentioned the respect that teams have to show to Detroit, even if they don't plan on "lying down and letting them walk all over you."

To this we say, as politely as possible mind you, bullshit. If the Blues are going to make the playoffs they need to stop respecting the teams above them. They gave no respect to San Jose on Thursday and put in a fantastic performance. They pounded the body as much as possible; never gave up on any puck battles; went to the net as often and as strong as they could.

San Jose is a good team and the Blues made them look like a very beatable team. If they get into the playoffs and have to face San Jose, we all know that the Sharks will be thinking about that game and be worried. It's time to do the same thing to Detroit. backing off and respecting their skill is exactly what the Wings want; it gives them the room to operate that their puck-movement style requires.

If the Blues get washed out by the Wings again today and still manage to get into the playoffs, do you think they'll give the Wings any worries at all if they meet in the first round?

Today is the day to send a message.

Today is the day to stand up.

Today is the day to show them what you're made of as a man. As a team.

Today is the day.

Game time is 1 pm central. TV is KPLR Channel 11 (sweet updated Blues page). Radio is 1120 KMOX. The opposing team viewpoint is at Winging It In Motown. This is your game day thread.