Boy, for a first place team that has no concern for a team like the Blues, Detroit's bandwagon fans sure do get excited when they beat them, don't they? 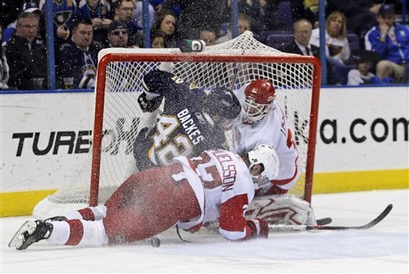 Hey, Ozzie. What up?

Bottom line for the Blues is that, as we said before the four game homestand started, they have to win three of the four. Win tomorrow and nothing has changed. If they let this loss, which basically boiled down to a 46-second, three goals against meltdown at the start of the second period, get in their heads then the season is lost.

Keep winning games and get into the playoffs. When they accomplish that and their first round opponent is the Wings? Well we'll deal with that when the time comes.

For those of you who want to see Jeff Woywitka and Chris Mason fire off their versions of, "I'm not here to talk about the past," check out their brief post-game interviews: