Blues Take On The Wilds

Share All sharing options for: Blues Take On The Wilds 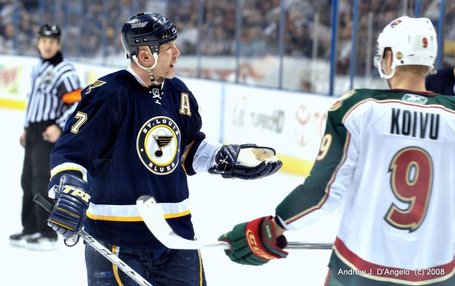 "Seriously, if you guys aren't gonna play hockey right, why play at all?"

You know, we're having a hard time remembering what happened yesterday but we have hazy memories about a really good hockey game that was only 59:14 long. Seems like we won that, but we may be missing something. Like we said, it's really hazy.

Today brings us the Minnesota Wild, a team that plays a style on the polar opposite of their nickname. They're game is all about slowing the pace, limiting chances, playing tough defense and relying on good goaltending to win games. To say that their offense is anemic is to say that Minnesota has more than a couple lakes or that it gets semi-cold there. Or that they have a slightly strange accent up there. In fact, their offense is so weak that a fifty-year-old native of Ireland is leading the team scoring with a paltry 20 goals.

Owen Nolan, of course, is the face of the undoing of the Blues' last great rebuilding effort. When he led his eighth-seeded San Jose Sharks to a stunning upset of the President's Trophy-winning Blues in 2000, it put the brakes on what was becoming a successful build-from-within movement.

Almost immediately after Nolan bombed in a last-second goal from center ice to end the first period of Game seven, ownership under Bill & Money Laurie forced Larry Pleau and the rest of management to scrap the youth movement that had seen players like Jochen Hecht, Ladislav Nagy, Michal Handzus and others move up from the system and onto the roster. Who knows if their development would have progressed if left in the system they had thrived in up to that point?

Instead it was mandated to 'win now' rather than build a foundation. Players like Keith Tkachuk and Doug Weight were obtained and goalies like Sean Burke and Mike Richter were pursued. Guys like Mike Sillinger and Valeri Bure were brought in using youngsters as the trading pieces. The team's pipeline turned to a dribble and the wheels were set in motion for the stunning collapse of the franchise that occurred coming out of the lockout.

And yes, we still blame Owen Nolan for all of that.

Beyond Nolan, the Wilds look to Mikko Koivu, who has finally stepped out of the shadow of big brother Saku (and half-brother Zeppo) and become a decent offensive threat. They would typically count on Marian Gaborik to lead the way on the scoresheet, but the chronically banged up Slovak has missed all but six games this year and will not return to the ice until after this upcoming UFA summer.

The Wilds have two good goalies, the elder of which, Niklas Backstrom, was recently signed to a large dollar four year contract. He's got 30 wins this year and will likely start tonight. The younger goalie, Josh Harding, is also due a new contract this summer and it is our own Prospect Department that has taken up the cry of sending him an offer sheet that the Wild cannot match.

Two points against the 10th place team is extremely important if the Blues hope to continue this run to the playoffs. They have a season record of 2-1 against Minnesota, including a 4-2 win the last time they met back in December in St. Louis.

Game time is 5 pm, TV is KPLR Channel 11 again (sweet Andy Griffith coming up straight after the final horn) and KMOX is your old school option. If you'd like to see the other side's opinions on how important this matchup is, try Hockey Wilderness.

This is your game day thread.