Your Game Time Prospect Department is live at Carver Arena, on the (flooded) banks of the Illinois River in Peoria, where your Peoria Rivermen are taking on the Abbotsford Quad Cities Flames. 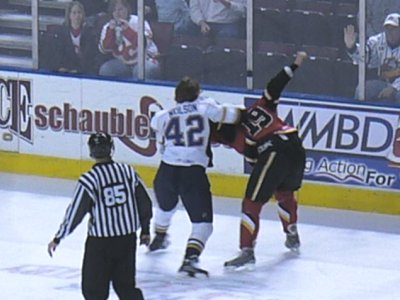 1:47 First: Peoria on a five-on-three. Currently, there's a delay while the zebras discuss things with QC.

2:17 Peoria finally gets a shot on goal; Keetley with the save.

3:36 Junland fires on net; save by Keetley. Decent puck movement by the Rivermen.

Legace in goal for Peoria (wanted to see Holt after last night's win in Grand Rapids); he hasn't been tested yet.

5:55 Peoria on the PK; Curt Fraser with a high-sticking call. Stastny, Richmond, Porter and Justin Fletcher on the PK, pretty efective so far,. Legace just froze the puck.

13:25 Legace with the stick save on a partial breakaway...

End of first period. Peoria leads 1-0 on Whitfield's goal, Quad Cities with a 7-6 lead in shots on goal. The Pekin Dragons squirt team is being honored at center ice for their NIHL championship.

My computer shut down with about five minutes to play in the first, for reasons known only to God. While we were out, QC's chief goon Peter Vandermeer decided it was time to shake his team up, and absolutely mugged Alex Hellstrom at center ice. Vandergoon ened up with 19 minutes in penalties, but the Rivermen failed to capitalize on a four-minute power play.

Time to go get some pictures from ice level; the Live Blog resumes later in this second period.

Here's one... Yan Stastny, just before he scored the go-ahead goal for the Rivermen... 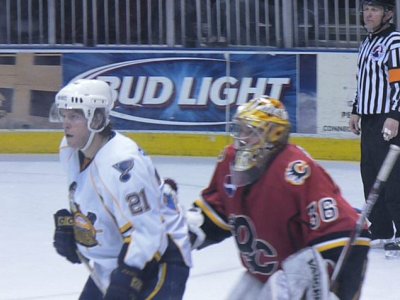 Stastny, from Whitfield (his second point) and Porter (his second assist) at 18:24 of the second. 2-1 Rivermen. Third period is under way.

2:51 Legace gives up an amazingly soft goal; Junland slides to block it, gets a piece of it, and the puck trickles by Manny on the stick side. Anyone still wonder why Manny's here in Peoria and not in St. Louis?

5:49 Porter scores, his third point of the game... assists to Stastny and Hellstrom, who have both played well today.

The Rivermen would be up 3-1 if Legace was half the goalie he was last season...

Live Blog is shutting down since the Blues are about to get started. I'll update the final score, and post a few more pics, when I get home.  This is your Game Time Prospect Department, signing off from Peoria, Illinois...