Share All sharing options for: Blues Tame The Wild

We're sure we don't have to say it aloud, but pretty big win, eh? As we've mentioned, this homestand was a win three out of four proposition. Anything less would have put the Blues too far behind in the standings before going out on the roadie. It would have been a lot nicer to avoid the 46 second debacle of Saturday afternoon, but we're past that now. 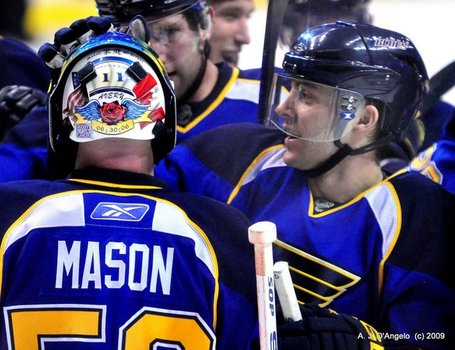 Next up is a game at the Oilers on Tuesday, at the Canucks on Thursday and then at the Flames on Saturday. We'd like to say that they gotta win two and get a point out of the third, but we'll be happy with a two out of three on this one.

As of this writing, the Ducks are losing to the Sharks and the Blues are in 10th place, one point back from eighth place Edmonton and two back from seventh place Dallas.

Some questions about the post-game interviews:

Tuesday is going to be a big one, be sure to bring your green beer for the GDT.