Blues Have Little Margin For Error

Share All sharing options for: Blues Have Little Margin For Error

If the Blues were a cat, that feline would be on about life eight. Maybe nine. And while it may be exhilerating for players, it worries the crap out of fans. 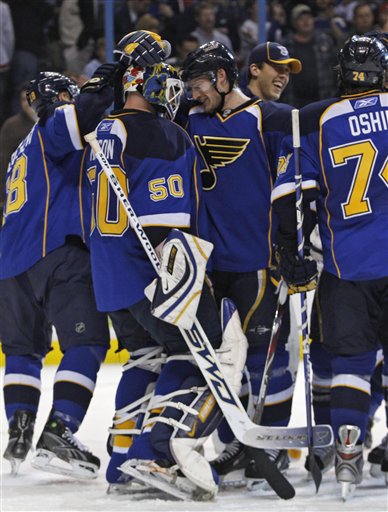 Sure the Blues have gone 8-4 over their last 12 games, that blistering pace, among the league leaders over the same time span, has only kept the Blues clinging to the playoff race, not in a playoff spot as the number of games left on the schedule continues to dwindle.

With 13 games remaining for the Blues, they have 72 points, two out of eighth place. They're tied with Minnesota, one point behind Edmonton and two behind Dallas. That's crowded, but a little simpler if you discount Anaheim's chances after they dumped players at the trade deadline and are now two points behind the Blues, four out of the playoffs.

As long as there is more than one team with the Blues in contention, it means every night is a must-win night. And the players know it.

"I love it. This part of the season playing with these guys is awesome, every game means something. This is our playoffs to get in the playoffs. This is fun; this is what it's all about. I think every athlete loves being in this position," goaltender Chris Mason told reporters Sunday after the Blues finished off the Minnesota Wild. "The bottom line is we can only do something about the game we're playing. Yeah the schedule is winding down, but to get as many points as you can, you can only think about the task at hand."

The interesting part about that comment is that while fans are obviously energized and hopefully having a good time right now (except when Detroit is on the schedule), this is nerve wracking. I'm nervous on game day. During the games it's even worse. For the players, it's fun. And if they can keep that attitude, they'll remain loose and dangerous. If the players took these games as seriously as I do, they'd never be able to perform.

Don't get me wrong, this is shaping up to be a thrilling end to the season, especially when you compare how this team is performing against recent editions of the Blues. Last year the Blues finished with 79 points, 81 the year before that. So they're within easy striking distance of posting their best season since the lockout. And to put into perspective how far this team has come since that first season back when the team was gutted and put on the sale block, in 2005-06 the Blues finished last in the NHL with just 56 points.

Of course there are some people who follow the team that wonder why the Blues are putting forth such effort to make the postseason when they won't have a chance to advance. I disagree with that for a couple reasons. First, the young guys are getting a taste of must-win hockey in the NHL. The playoffs are a different beast and hopefully the baby Blues will be better prepared the first time they make it - if it's this season or not. Secondly, you never know. The Blues have a winning record against the Sharks. They've dominated the Blackhawks. Let's ignore Detroit.

"The first goal is to get in there. Once you're in the playoffs, anything can happen. We've put ourselves in a good position. I think we're one point out right now and that's exciting," center Andy McDonald told reporters after the game Sunday. "The guys should be really proud of themselves. Obviously I missed a chunk of the season, but the guys who have played the whole season and battled through it. It's quite an accomplishment."

The Blues have a vital road trip that begins tonight in Edmonton, a team they're fighting in the standings, and goes through Vancouver and Calgary, two teams that are safely in the playoffs but are still jockeying for position. St. Louis has a 13-16-3 record on the road this season. Only one team in the Western Conference has won fewer games away from home. And the opponents aren't going to be easy. But the Blues have a chance, something that couldn't be said since before the lockout.

Come back tonight for the GDT. We'll all be drinking some jolt cola to follow the game starting at 9 p.m. CDT.