Share All sharing options for: Leaving Points On The Table Hurts Blues

Quick question: did the pro team scouting for the Blues say nothing about getting the puck up against Oilers goalie Dwayne Roloson? Especially in the shootout, when either the first or third shots lifted higher than about eight inches off the ice potentially change the outcome. 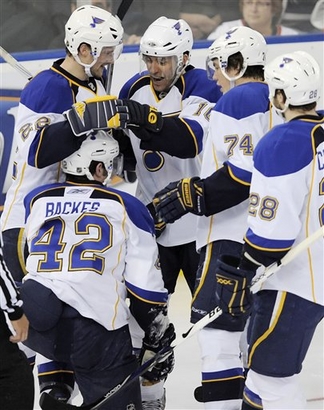 So the Blues help Edmonton into the seven spot in the standings, Dallas falls to ninth with a loss to Vancouver and the Note remain mired in 11th place, two points back from seventh (Oliers, who have a game in hand) and eighth (Nashville, who holds the first tie-breaker with 35 wins to the Blues' 32).

Far be it from us to say that the next two games against Calgary (third in the West) and Vancouver (fifth in the West) are must-wins, but we will say that they are must-get-two-points games. Doesn't matter when they win, just gotta win.

Andy Murray seemed to be pretty upbeat in his post-game interview, so we'll try to stay positive, too.

The hard-working, hard-charging, blow their doors off Blues of the past few weeks need to show up Thursday and take it to a Flames team that hasn't been fantastic and then repeat that against a tougher Canucks team than the Blues beat during their last meeting.

Finally, what the hell happened to the Oilers? Their fans are notoriously quiet and fit that bill tonight, but the team has always had a reputation for being quick, skilled and exciting. Now they play like they're New Jersey West.