The Rise and Fall of the Salomons (Part II)

Share All sharing options for: The Rise and Fall of the Salomons (Part II)

[This is the second installment of a three-part series. It orginally ran in the Game Time paper from Mar. 10 through Mar. 14. Part I ran on Wednesday.]

Storm clouds began to gather as early as May 18, 1970, for the Salomons when in an article in Sports Illustrated Sid III struck an ominous tone. "They say we got [the franchise] for $2 million, a bargain. But remember this, we spent another $8 million for our building and improvements. That's a big investment. We don't know if we'll be able to compete well enough in the future to make it pay off."

Salomon's quote was disturbing because it was made on the heels of the Blues' third consecutive Stanley Cup Finals appearance, and after the team had averaged at least 100 percent attendance the previous two seasons. With such success both on and off the ice, how could the Salomons be in potential trouble? 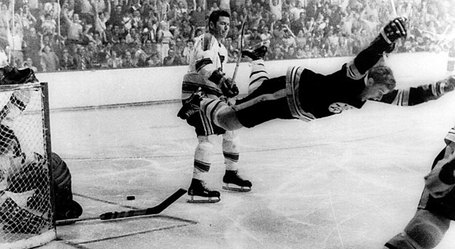 It wasn't long after Noel Picard made Bobby Orr's Cup-winning celebration an iconic image that the Blues started to have financial problems.

It is difficult to say with total certainty, since the Missouri Arena Corporation (MAC), the corporate entity set up by the Salomons to own the St. Louis Arena and the St. Louis Blues hockey club, was a private company whose financial information and records weren't subject to public disclosure. However, various articles from the period, particularly from the St. Louis Post Dispatch, paint a telling picture.

It seems Sid Jr.'s financial troubles may have started back on August 9, 1972. That was the day that Crown Life Insurance, for whom he had been a general agent for in St. Louis since 1946, terminated its relationship with his life insurance agency. Salomon had been a top producer for Crown and had amassed his personal wealth through his 26-year association with the insurance giant. He later filed a wrongful termination lawsuit against Crown for $1.6 million, but ultimately lost the case after the U.S. Court of Appeals ruled against him on June 23, 1976. Although this development didn't conclusively cause the Salomons' financial decline, it is conceivable that his separation from Crown was a major factor in his deteriorating fiscal situation.

The first widespread public disclosure that all was not well occurred in July 1975. For months, the Salomons had been lobbying St. Louis politicians for the right to build a 1,000-car parking lot in Forest Park, across from the Arena. After much public criticism over the proposal, chiefly from environmentalists that decried that more than seven of Forest Park's 1,400 acres would be taken for the project, Sid Jr. withdrew his plan.

In a lengthy letter to St. Louis Mayor John Poelker on July 14, 1975, later published in the St. Louis Post Dispatch, Salomon not only explained why he was withdrawing his proposal, but a number of "the difficulties he had encountered in presenting major league hockey in St. Louis." These issues would be brought up repeatedly by the Salomons over the next several years:

1. Arena Costs and Maintenance: When they purchased the Arena in 1966, the 37-year old structure was run down and had been neglected for decades. It held only 14,200 fans in the Blues' first year and that was after the Salomons had poured $2 million in improvements into the building, on top of their initial $4 million purchase price.

Over the next several years, from 1968 to 1975, MAC spent $5 million more for further improvements to the Arena. Seating capacity was expanded to 18,000, amenities such as the Arena Club were added and deferred maintenance was addressed.

Salomon emphasized that while MAC had invested $11 million in private funds, on-going maintenance costs for the Arena were still extremely high. Moreover, since the Arena was not air-conditioned the structure could only be used for seven months of the year, even though fixed expenses continued year-round. 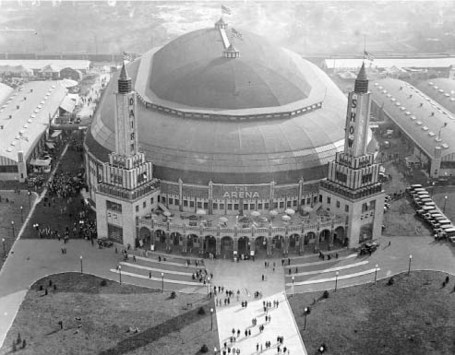 The St. Louis Arena was beloved, but upkeep on the old barn was high, contributing to the Salomons' problems.

2. High Taxes: Sid Jr. mentioned that the average NHL team paid 4.5 percent in city and state taxes while the Blues paid 9.5 percent, which was the highest in the league. Salomon wanted the city to reduce this tax burden on the club, which had cost him about $5 million since 1967.

3. Unfair Competition: At the time, the city of St. Louis owned and operated the Kiel Auditorium, which competed against the Arena for shows. For these events, Kiel charged rents substantially below what the market could command, which resulted in large annual operating losses that were in effect subsidized by city tax payers. These artificially low rents also made it impossible for the Arena to compete with the Kiel. Therefore, Salomon wanted the city to remove the Kiel as a competitor to the Arena for various events.

4. Lack of Government Support: Sid Jr. explained that other cities encouraged the presence of professional sports teams by building new municipal sports arenas and providing them to their teams at a nominal rent. Salomon sought a similar arrangement from St. Louis politicians, but was rebuffed, first when he tried to get a new arena built directly south of Busch Stadium, and second, when he lobbied for a new arena to be part of the new Cervantes Convention Center.

The city of St. Louis was also adamant that they didn't have the money to purchase the existing Arena from the Salomon's at fair market value, and were therefore unable to lease the building back to the Blues.

Finally, Salomon allowed that, "it was increasingly difficult for the Blues to operate competitively in St. Louis, and future planning for our operation might well be affected...MAC has not shown an operating profit since it had begun operation in 1967...and in the most recent year ending June 30 1975, our cash flow loss was very substantial." Although Sid Jr. refused to supply figures publicly, he added, "you can be sure what I state is true."

In December 1975, Salomon implied that if he couldn't get a better financial arrangement with the city, he might have to take the Blues somewhere else. Following through on his threat, he gave Blues fans and the city of St. Louis a jolt when they learned that in January 1976 that the team had sought and been given permission by the other NHL owners to move or sell the St. Louis Blues.

Blues attorney Jim Cullen reiterated that, "if we had our choice, we'd prefer to stay in St. Louis. The hockey team itself is making a profit, but we're losing money on the building and we're losing more on the building than we're making on the team....We are trying to make it clear that we cannot continue to operate under the present conditions."

Things remained relatively quiet for the next 12 months until "Black Monday" on January 31, 1977. On that day, numerous Blues employees were fired so that the team could meet its Feb. 1 payroll. Among those let go was Senior Vice-President Lynn Patrick, the Salomon's loyal lieutenant and the first employee ever hired by the Blues in 1966. A gracious Patrick said he held no ill feelings about the move saying, "I could see this coming. The team was short of money and something had to be done. I know the situation and I know it isn't good."

The only statement released by the team said, "the financial burden of the Arena forced the Blues to consolidate efforts of various departments, necessitating reduction of various office personnel."

In addition to being victimized by the high costs of the Arena, the Blues also began to suffer at the gate. After leading the entire NHL in attendance for five years in a row from 1970-71 to 1974-75, and reaching seating capacity of 100 percent or greater for seven straight seasons, Blues attendance started declining, accelerating dramatically during the 1976-77 season. One anonymous source close to the Blues said, "that season ticket sales [in January, 1977] actually were down 5,000 from a year ago."

Not even a roster featuring Gary Unger, Derek Sanderson, Bob Gassoff and Bobby Plager could keep the attendance up in 1976-1977.

Most disgruntled fans felt this drop-off was occurring due to "bad management," and cited two specific culprits. First, was the Salomons' threat to leave St. Louis, first uttered in January 1976. As one former season ticket holder noted, "it was as simple as this: when they threatened to move out, I quit." Another former holder echoed this sentiment: "the Salomons alienated a lot of people when they thought the city owed them something...and then they threatened to move and they made everything sound like the fans' fault."

The second most prominent reason was fan disgust over all the players and coaches that had been turned over by Salomon's son, Sid III. Yet another former season ticket holder said, "you hear so much disenchantment. I think it started with Sid the Third. His trades, his canning of coaches - I think people have never forgiven him for firing Scotty Bowman and Al Arbour."

Although Sid III was never a coach or general manager, he was notorious for his interference with his hockey staff over players, on-ice strategy and trades. Most fans felt that Sid III was actually pulling the club's strings behind-the-scenes, dictating to others what he wanted done.

One of the biggest problems with this approach was that he could never stick with a plan. In what can only be described as a schizophrenic reign of error by the Salomons, lasting from when Bowman left in April, 1971, until Ralston-Purina closed on the purchase of the club from the Salomon's in September 1977, the Blues had six different GMs and made eleven coaching changes. It also made team continuity and planning impossible.

Arbour and Bowman were both exasperated by Sid III, as was Jimmy Devellano, who was originally employed by the Salomons as a Blues scout. After this trio left St. Louis, they all became NHL legends over the next four decades, winning 20 Stanley Cup championships with the Canadiens, Islanders and Red Wings.

Echoing previous sentiments, Devellano said, "the owner's son, Sid Salomon III, was an awful meddler. He couldn't keep good managers and coaches because of his constant meddling. Sid was a good person, but he just didn't know hockey. His interference caused a lot of turmoil in St. Louis, and it cost the Salomons dearly."

An anonymous former employee that was part of the "Black Monday" purge spoke to the St. Louis Post Dispatch on February 2, 1977 about how MAC reached its current financial crisis, "The Arena was over-improved. A lot of money was wasted... the Arena was also overstaffed; there were just a lot of people out there who had no jobs...I could see where they could have saved $200,000 by cutting them off."

This individual also added that, "too much money was tied up in deferred contracts to early Blues stars, that too much money was lost in paying off all the various coaches who had been fired and that the Blues took their customers for granted after reaching the sell-out point."

By the spring of 1977, the franchise was careening out of control. The club was hemoraging money, fans stayed away by the thousands and a bankruptcy filing seemed imminent.

As bad as things were, they would only get worse. The third and final installment of The Rise and Fall of the Salomons, detailing those events from the summer of 1977, will appear Saturday on St. Louis Game Time.