If you listened to sports talk radio in St. Louis today (and who didn't?), you'd know that tonight is the most important game for the Blues franchise since the locked out season of 2004-05.

Obviously everyone is excited. Check out Roberto Luongo. 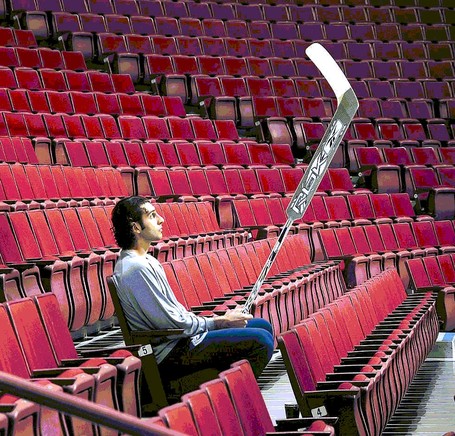 Is that a goalie stick in your hand, or are you just happy to see the Sedins?

Hey, we get it. The Blues are right outside the playoffs. There's less than a month left in the season. Time is getting short. But as soon as this game is over and thinking positively, say the Blues win...well then Friday night's game is absolutely the most important game for the franchise since the lockout. I guess we kind of agree, it just doesn't seem like a road game in Vancouver could have that much gravitas.

Three things you need to know:

1. When you slash Henrick, Daniel cries.

2. Roberto Luongo is the Canucks captain and best player. But he doesn't wear the C because goalies are obviously dumb choices as captain.

3. If you want to see brand new combinations of dirty words, make sure you hang around if the Blues start playing poorly and fall behind early.

Oh, and Pavol Demitra has a sore knee. Poor baby. And he was such an iron man for St. Louis.

We're staying here tonight as a group, but you could always visit our friends and Nucks Misconduct and say hello. With Vancouver safely in the playoffs and picking up ground on Chicago seemingly every night, I'm sure they don't want their  team to win tonight too badly.

That's it. Game time approaches. See you in the comments.