March Will Be Interesting For Blues

Share All sharing options for: March Will Be Interesting For Blues

If you look at the schedule, March is an interesting month. Eight of the Blue's last nine home games are this month. The team plays 14 times in 27 days. Their last road trip to the Eastern Conference is this week. They play twice this month against the Detroit Red Wings. That'll be interesting.

The Wings are coming off an 8-0 defeat at Nashville over the weekend. Yeah, that's right. The Predators put up a touchdown and were dicks and went for the two point conversion over Detroit. Here's an action shot from the game. 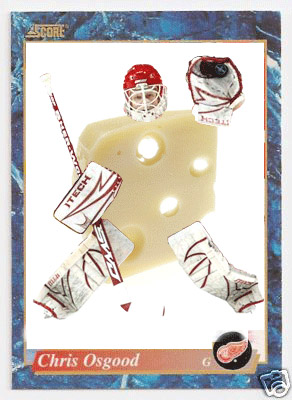 And you thought goalie pads stink.

Actually that's from the Puck Daddy create a hockey card contest that wrapped up not long ago (in cased you missed the entries, here's all 284). Somehow that one didn't win, but after his recent "vacation" from the team it's pretty representative. Osgood didn't allow all eight goals Saturday night. Just half of them.

Look, we have no delusions about where the Red Wings are in the standings and how they're the defending Stanley Cup champions and all that. We get it. But those facts make it that much sweeter when the Blues pull off a win over the Wings. And as we have said around here all week, the Blues need to win or at least get a point every single night. So while going to overtime isn't our most favorite thing for the Blues, it wouldn't hurt that much considering the Wings are near the top of the standings.

And while a certain Web site calls us "bitter Blues fans" (there's no way I'm linking it), it's fun to take cheap shots at the Wings. Our hate keeps us warm at night and saves us money on our heating bills. And at some point when the youngsters are all grown up and Chris Chelios is even older, the Blues will have their way with Detroit -- much like the 1980s. I mean, Chelios has to retire some day, right? Right? 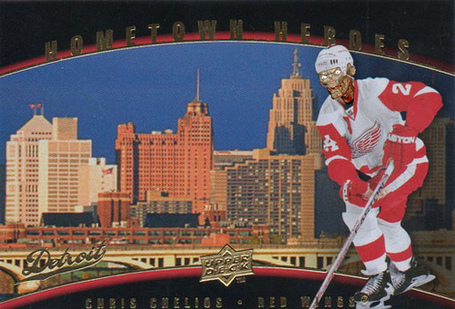 He looks good for his age.