Mason Up For Fan Fav Award

Share All sharing options for: Mason Up For Fan Fav Award

So Mr. Baldy With Big Beard Combo is up for an award this week. 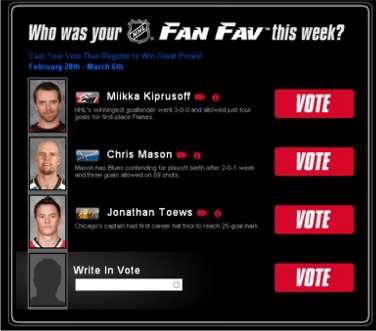 Next to Toews it says, "And no, it's not pronounced Taves."

In case you can't read the fine print, it says Chris Mason "has Blues contending for playoff berth after 2-0-1 week and three goals allowed on 89 shots."

So we're not going to say you should vote for Mason over a Blackhawk or a Flamer, but there are worse things you could do. Like write in Chris Osgood as a joke.

What an odd looking trio. I think that photo of Miikka Kiprusoff was taken on the set of "To Catch A Predator." Then you have the bald headed beard combo. To top it off, a faux hawk on a Blackhawk. It's like he had to make himself taller to ride Space Mountain at Disney World.

If you'd like to vote for Mason, go to the Fan Fav Award site. And no, I don't know what he gets if he wins. Hopefully, hair.