Wait, The Season Isn't Over?

Share All sharing options for: Wait, The Season Isn't Over?

So that was surprising. The Blues were down 2-1 going into the third period at Calgary. John Kelly and Bernie Federko both were upbeat headed into the final 20 minutes, but it might have been because playoff tickets go on sale Saturday. How foolish would that have looked if the Blues didn't have the comeback Friday?

Anyway, a pretty goal by Andy McDonald was followed by a crazy wraparound/harmless looking/puck with eyes goal off the stick of Jay McClement to give the Blues the lead. And somehow they withstood the pressure, Chris Mason made a couple big saves and it was over. And suddenly the Blues are in ninth place, two points out of the last playoff spot again with 75 points, barely ahead of three teams with 74. It's shocking enough to knock you on your ass, kind of like Mikka Kiprusoff. 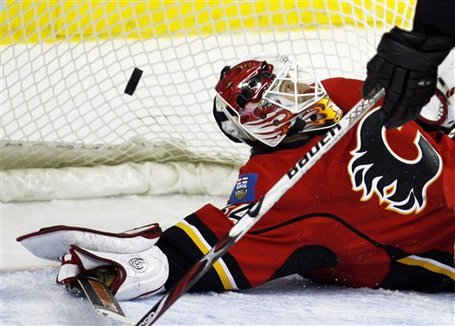 Hey, anybody see where the puck went?

Of course the standings are bound to change for the Blues with St. Louis not playing again until Tuesday. But for one night, the season is alive and off life support. Now if we can only figure out if it's just a flesh wound for Keith Tkachuk. And yes, that's two posts with Monty Python references in one day. New world record.

By the way, let's see how optimistic everyone still is after the 1-1-1 Western Canada road trip.

And don't forget: morning links, the third part in the series about the original Blues owners and a you write the comedy.