The Rise and Fall of the Salomons (Part III)

Share All sharing options for: The Rise and Fall of the Salomons (Part III)

[This is the final installment of our look at the first ownership group of the St. Louis Blues. Part I and Part II ran earlier this week.]

By 1977, the Missouri Arena Corporation (MAC), the corporate entity set up by the Salomons in 1966 that owned the Arena and the hockey team, was hemorrhaging money. Fans stayed away by the thousands, disenchanted by the Salomons' threat to move the team, and Sid III's constant meddling in the team's on-ice affairs. As St. Louis Post Dispatch columnist Jeff Meyers put it, "what began as a noble adventure into professional hockey by the Salomons has turned into a disaster."

The rapid off-ice decline of the franchise mirrored the physical deterioration of the Salomons as well. In January 1977, Sid Jr. suffered two heart attacks in one month, the second of which was severe enough to put him into a temporary coma. Sid III, who battled against cancer most of his adult life, was back in the hospital again, getting treatment for a relapse of his Hodgkin's disease. 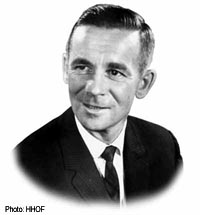 With the franchise and its owners in critical condition, much of the day-to-day operations as well as tending to the future of the franchise fell to general manager Emile Francis.

Critically ill, financially strapped and far removed from the day-to-day operations of the team, the Salomons indicated that they would not operate the team for the 1977-78 season. In order to keep the franchise alive, a new ownership group would need to step forward to buy the Arena and the Blues.

The bad news continued. In late April, 16 MAC employees were fired, which stripped it to nothing but security personnel. At the NHL's Board of Governor's meeting in May 1977, rumors swirled that the Blues were about to declare bankruptcy.

Not addressing this gossip, Blues Vice-President and General Manager Emile Francis insisted that negotiations with several different ownership groups to sell the team were going well. The most likely suitor seemed to be Fred Kummer, president of HBE Corp., a hospital and medical design/construction company headquartered in St. Louis. In his negotiations, Kummer stressed the need for the Blues to clear up their list of creditors.

The largest single creditor to which Kummer was referring was Cousins Mortgage & Equity Insurance Co. of Atlanta. Cousins held the $5.4 million first mortgage on the Arena, which reportedly required about $70,000 in amortization payments per month.

When MAC became unable to pay this debt service, the Salomons, Kummer and other potential ownership groups sought to settle this debt with Cousins at a heavily discounted price, believed to be between $2 to $3 million. But each time, no agreement could be reached because Cousins refused to modify these loan terms.

During Kummer's negotiations, word leaked out that MAC and the Salomons were facing an increasing number of unpaid creditors beyond Cousins. On June 5, The St. Louis Post Dispatch reported that St. Louis City Counselor Jack Koehr was preparing to sue the Blues to recover $265,283 in delinquent amusement taxes that the club hadn't paid since March 1976. William Combs, comptroller of the Blues, said, "the club intended to pay the tax but had been unable to do so because of financial problems."

Two days later, the Post Dispatch reported that former Blues player Jim McCrimmon had sued the Blues in U.S. District Court to recover $90,000 in unpaid wages. It was also reported that three weeks earlier another former Blues player, Bruce Cowick, filed a similar suit seeking unpaid wages. In addition, other unfulfilled obligations included extended payment deals on contracts with several early Blues stars such as Red Berenson, Jacques Plante and Glenn Hall, that reached into the 1980s. A frustrated Fred Kummer allowed that "the Blues are in default on many things. We're trying to decide how ugly to make the whole thing. It could be ugly. That's what bankruptcy is all about."

However, on June 24, 1977, after months of negotiations, Kummer ended talks with the Blues stating, "HBE tried everything that was realistically possible, but negotiations with major creditors of the Blues failed to produce a viable purchase plan."

The unfortunate reality was that the purchase of the Arena and the Blues was an unattractive proposition for the same reasons the Salomons were looking to sell in the first place, high city and state taxes, unfair competition from the city-owned Kiel Auditorium, a lack of government support for building a new facility and high maintenance costs on the St. Louis Arena.

Blues attorney Jim Cullen called Kummer's announcement "the darkest day in the history of the team. What we need now to save the team and the franchise for St. Louis is a prayer, a minor miracle, some emergence of civic pride of some potential buyer."

After HBE's negotiations with MAC and the Salomons ended, it was revealed that Mercantile Bank & Trust Co. was reportedly owed $1 million on outstanding loans to the franchise. In addition, the concession company Sports Service, a subsidiary of Emprise Corporation, was also reportedly owed $800,000, stemming from a $1.5 million loan Emprise gave the Salomons back in 1967, in exchange for a long-term contract to provide food and beverages at the Arena.

Brian O'Neill, the NHL's executive vice-president and the man responsible for drawing up the NHL's schedule said in early July, "No deadline for the sale of the St. Louis Blues has been established. I would assume however, that something would need to be done by Aug. 23 when we will have our semi-annual meeting in Toronto."

Even if the Blues found a new owner with deep pockets in the next 30 days, the Blues uncertain future meant that no 1977-78 ticket selling campaign had been conducted since the previous season ended back in April. The Blues future was also damaged when their No.1 draft pick, defenseman Scott Campbell, decided to sign with the Houston Aeros of the World Hockey Association. Campbell indicated that the Blues' financial problems and uncertain future were the main reasons behind his decision.

With only a month until O'Neill's deadline, unconfirmed reports surfaced that Ralston-Purina Co., the pet food company headquartered in downtown St. Louis, might be interested in purchasing the Blues. Throughout July, these whispers became louder until rumor became reality. On July 27, 1977 Ralston announced a tentative agreement to buy the St. Louis Blues.

R. Hal Dean, Ralston's chairman, cited "civic duty" as the reason for the company's purchase of the team. The Post Dispatch reported that "the Blues apparently would have been forced to cease operation if the St. Louis-based pet food giant had not stepped in." Dean stated that "Ralston Purina wouldn't have entered the hockey business if we weren't convinced that, unless we bought the team, the Blues would have left St. Louis. We stepped in only as a last-ditch, last-resort effort."

The only detail of the purchase made public was that "the transaction will represent a cash commitment by Ralston of some $4 million." Dean also added that "all secured debts will be honored, but the issue is too complex to go into all the details at this time." This commitment only included the purchase of the hockey team. At the time, Ralston didn't plan on purchasing the St. Louis Arena, only renting it for Blues home games from a new "joint venture" that was leasing the building from Cousins Corp.

But when the newspapers announced Ralston's official closing on the purchase of the St. Louis Blues hockey team on Sept. 29, 1977, the modified deal included acquisition of the St. Louis Arena as well. Two months of due diligence convinced Dean that this was a better arrangement for his company. Ralston agreed to buy the hockey team, the Arena (renamed the Checkerdome) and the 20 acres of land on which it sat, as well as the stock of the Missouri Arena Corporation. Dean said the transaction cost Ralston about $8.8 million (or $30 million in 2007 dollars,) and the "satisfaction and assumption of MAC's financial obligations, most of which were discounted." This included previously mentioned debts to Cousins Mortgage & Equity Insurance Co., the City of St. Louis, Mercantile Bank & Trust Co., Sports Service Co., and former Blues players, staff and personnel.

Dean also mentioned that the Checkerdome would focus on attracting a wide variety of activities and functions year-round. This meant leasing the building to an experienced management firm, Dome Associates Inc., as well as installing air-conditioning in April 1979. Under the Salomons, it was determined that the installation of air conditioning was cost-prohibitive, allowing the Arena to only be used about seven months of the year, from October to April.

Moreover, during the Salomons' reign, Sid the Third stubbornly insisted that his Blues got the first call on all dates at the Arena, even for daily practices. He refused to alter the Blues schedule to accommodate circuses, concerts and other would-be renters, who would have brought in more money to help MAC's bottom line. The result, as Post Dispatch columnist Bob Broeg stated, "was that the Arena was dark too many nights and plenty of non-hockey events never came off. Common sense became nonsense, and turned the Arena into a minus, rather than a plus."

Here's a telling example of how this hurt the Salomon's bottom line: During the 1976-77 season, the Arena had barely more than 100 dates filled for the year, compared to 175 in Chicago, 200 in Atlanta, 275 in Washington and 350 in Philadelphia. Quite simply, to make a 40-year-old, 18,000-seat venue with high operating costs profitable, one must have income-generating events for more than half a month, each month, for seven months a year. Either the Salomons never realized this certainty, or became aware of it far too late.

After Ralston Purina rescued the Salomons in 1977, they moved down to Florida permanently. In May 1986, Sid Jr. died of another heart attack, at the age of 76. Less than three years later, in December 1988, Sid III finally succumbed to the cancer he had battled all his life. He was just 51 years old.

Post Dispatch columnist Jeff Meyers said, "if the Salomons had a fault, it was that they tried too hard to please everybody. They were obsessed with making the Arena a comfortable, visually exciting place to watch a hockey game, and obsessed with putting a winning team on the ice...the Salomons cared."

Former Blues broadcaster Dan Kelly intoned, "[St. Louis] had such great early success, that I think the Salomons thought it would be easy...when Sid Jr. moved to Florida, I think he was most sad to leave the hockey team that he gave so much to build. He really did love the Blues, and I think he died of a broken heart."