Share All sharing options for: Greatest License Plate Ever

Today was the Dream Night With The Blues charity event at Side Pockets in St. Charles. This is the second year I've gone to the event, primarily to take the daughter to see her favorite player, Barret Jackman. She was born to be his biggest fan, her birthdate is 5-5-05. And to his credit, No. 5 is always lights up and interacts with her. Honestly, he's the only player she can identify on sight and perks up every time they call his name on the television or radio broadcast. 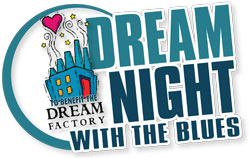 In case you don't know about the event, it benefits the Dream Factory, a charitable organization that makes dreams reality for seriously ill children. It's a great organization that's 100 percent run by volunteers.

For the event they basically have every player on the team (except for the injured Keith Tkachuk and Erik Johnson) at different stations around the place. Some are straight autographs. Others are photos. Then you can challenge a player to pool or bubble hockey or video games on the Wii or Playstation 3. Each interaction is a small donation. And while I realize it's probably not the players' favorite thing to have long lines of star-struck guys asking for autographs (or in the case of some of the role players, no line), the players seem to really enjoy the interaction with the kids.

The thing sold out ahead of time, for the first time ever. Spirits were high after the comeback Friday night in Calgary. The turnout and the energy are a reflection on how the city is feeling about the Blues right now, enjoying the playoff push and rebuilding effort.

It's an interesting people watching experience. We have more proof that TJ Oshie is King of St. Louis. He had special rules where he couldn't actually play games, just sign autographs and take pictures. Each station was 30 minutes. Lines started forming 30 minutes before each session. He had to cut through the kitchen to get around the crowd. Insane.

One of the things he and some of his teammates were asked to sign was the greatest license plate ever. When I took the picture, it was kind of dark and I didn't want to be a total creep about photographing this woman's license plate. So I took it quickly from a little bit of a distance (inadvertently increasing the creepiness factor, but she didn't notice so let's move on). This photo has not been touched up or altered. It's the raw image. You can see the power it has at its core. I give you this work of art, a masterpiece of painted sheet metal. 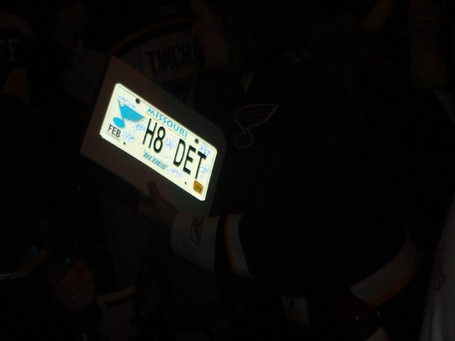 Whoever approved this at the DMV, you're probably reading this right now.