Blues Still In It With 10 Games To Play

Share All sharing options for: Blues Still In It With 10 Games To Play

An 82-game season that started during the first week in October has been reduced to a 10-game sprint for the St. Louis Blues.

The last real home stand for the Blues starts Tuesday night against the Los Angeles Kings, a team the Blues have yet to beat this season. Thursday it's the Canucks and Saturday the Blue Jackets. After this week, the Blues will have seven games left on the schedule, six of them on the road. This thing won't be easy, but the Blues are alive and kicking. 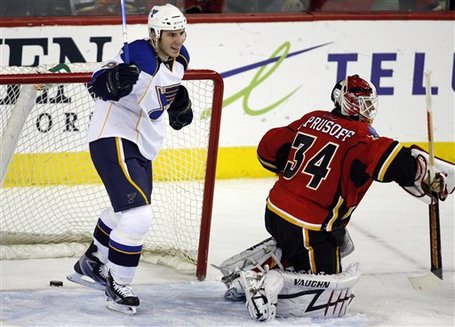 Steen has a nose for the net.

If you look at the standings, it's still a jumbled up clusterfuck. Edmonton is in seventh with 79 points. Nashville sits in the catbird seat, the eighth and final playoff team right now with 77 points. Anaheim and Minnesota each have 76 and then the Blues have 75. Unfortunately Dallas is still lurking with 74 points. That's five teams vying for one playoff spot, separated by three points. Four teams will be crushed at the end of the season. There are three good reasons why the Blues will be one of the disappointed hockey clubs. There are also three pretty good reasons the Blues will earn that playoff spot.

1. The Schedule: As I already outlined, there's no breaks for the Blues with who and where they have to play. The six road games in the final seven games is a daunting hurdle. The Blues are 14-17-4 away from St. Louis this season. With the number of teams in the mix, it's doubtful the Blues will be able to overcome their track record for the season. Even with the recently-completed Western Canada swing that ended Friday night, the Blues were only 1-1-1 with a come-from-behind win, a shutout loss and a shootout loss. Before that trip, the Blues were 4-2-1 over their last six road trips dating back to late February. With this many teams in the mix, I don't know if that kind of pace (if the Blues can sustain it) would be enough to win the eighth spot.

2. Injuries: Keith Tkachuk was a no-show at the team's Dream Night With the Blues charity event Sunday night. He didn't play Friday in Calgary after being hit by the puck on his arm. He was clearly bleeding on the replay. There have been reports that Tkachuk broke his wrist, but that hasn't been confirmed by the team. No Eric Brewer, Erik Johnson or Paul Kariya has been something the Blues have obviously overcome this season, but the team has reached its depth limit. They simply can't afford to lose another guy to injury, and even the loss of Tkachuk may be too much to handle.

3. Too Much Competition: Simply put, there are too many teams playing musical chairs, so the odds for any single one organization to outlast and play into April are long for any of the teams. With every team in the logjam playing 72 games, a one- or two-point advantage even right now is huge. There are 20 points on the table for all five teams. One regulation loss and the Blues could be looking at a four-point gap. The numbers are just too long.

1. No Giving Up: If the Blues were ready to pack the season in and line up for some pats on the back for staying competitive during a trying season, it would have happened Friday in Calgary. Down 2-1 going into the third period, that game was nearly over. But they kept fighting, playing physical and challenging the Flames in their own zone. Andy McDonald stepped up with a huge tying goal. Jay McClement who has emerged as a dangerous secondary scorer got the game-winner on a fluke play coming from behind the net and shoveling it into the net. These guys are leading by example and keeping the team moving forward. I wrote the Blues off more than once this year. They kept it up and proved me wrong. Why would that change now? That determination and momentum could be enough to carry them to the playoffs.

2. Chris Mason: The bald-headed and bearded goaltender has kept the Blues in almost every game he's played since taking over the No. 1 goaltender job. And he's played in every single once since Manny Legace was placed on waivers. You could argue that Mason needs the rest. Screw that. Sleep when you're dead. The biggest thing a goaltender can do for his teammates is give them confidence. When the Blues in recent years felt like they didn't have a solid goaltender because of injury or other situation, they didn't play well. In front of Mason the Blues play an aggressive style. They can do that because they have faith in Mason.

3. Physical Play: The Blues aren't afraid to fight. They play their best when players are hitting the opposition deep in their own end. David Backes sets the tone. Brad Winchester, BJ Crombeen and TJ Oshie keep it going. Barret Jackman give the defense attitude. When Brad Boyes is throwing his body around and backchecking, you know something's going right. At this time of year, players are tired. Physical play gives them a reason to dial it back, play with a little less intensity and let their guard down. The Blues can do that with their physical play.

I don't know what's going to happen. Any predictions this point could be blown to hell with just one Saturday night of games. It won't be easy, but it's possible. Time will tell.