With just 10 games left on the schedule for the St. Louis Blues, we've asked a few folks to come in and give the team some inspiration. And as a special treat, we'll let you inside the dressing room to hear the words for yourself. To kick this off, we've arranged for Gen. George S. Patton to give a few words of encouragement. General... 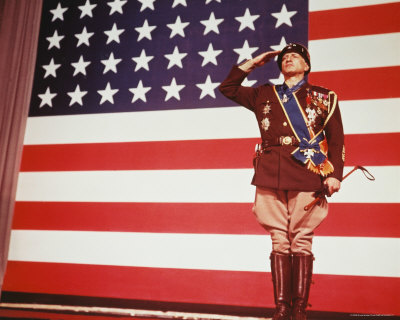 Ok, fine it's Georg C. Scott as Patton. And he's dead. You get the idea.

Now, I want you to remember that no bastard ever won a hockey game by dying for his team. He won it by making the other poor dumb bastard die for his team.

Men, all this stuff you've heard about the Blues not wanting to fight, wanting to stay out of the playoffs, is a lot of horse dung. The Blues, traditionally, love to fight. All real Blues players love the sting of battle.

Now, the Blues are a team. They live, eat, sleep, fight as a team. This individuality stuff is a bunch of crap. The bilious bastards who wrote that stuff about individuality for the Saturday Evening Post don't know anything more about the NHL playoffs than they do about fornicating.

Now, we have the finest food and equipment, the best spirit, and the best men in the world. You know, by God, I actually pity those poor bastards we're going up against. By God, I do. We're not just going to check the bastards. We're going to cut out their living guts and use them to grease the treads of our Zambonis. We're going to murder those lousy Kings bastards by the bushel. Frankly, I didn't even know Los Angeles still had a team. And they won't after tonight.

Now, some of you boys, I know, are wondering whether or not you'll chicken-out during the game. Don't worry about it. I can assure you that you will all do your duty and skate short shifts while maintaining defesive responsibilities. The Kings are the enemy. Wade into them. Spill their blood. Punch them in the belly. When you put your hand into a bunch of goo that a moment before was your best friend's face, you'll know what to do.

Now there's another thing I want you to remember. I don't want to get any messages saying that we are holding our position in the NHL standings. We're not holding anything. Let the Nashville Predators do that. We are advancing constantly and we're not interested in holding onto anything -- except the enemy. We're going to hold onto him by the nose, and we're gonna kick him in the ass. We're gonna kick the hell out of him all the time, and we're gonna go through him like crap through a goose!

Now, there's one thing that you men will be able to say when you get back home, and you may thank God for it. Thirty years from now when you're sitting around your fireside with your grandson on your knee, and he asks you, "What did you do in NHL," you won't have to say, "Well, I shoveled shit in Peoria."

Alright now you sons-of-bitches, you know how I feel.