Share All sharing options for: Blues Respond Under Pressure

We've heard for a couple weeks now about how the Blues are in a must-win situation every night. Since goaltender Chris Mason and some of his teammates started growing beards in February, the team has said every game is like the playoffs if they want to make the real playoffs come April. Tuesday night against Los Angeles, it actually felt for the first time like the Blues were in a playoff game. And boy did they respond. 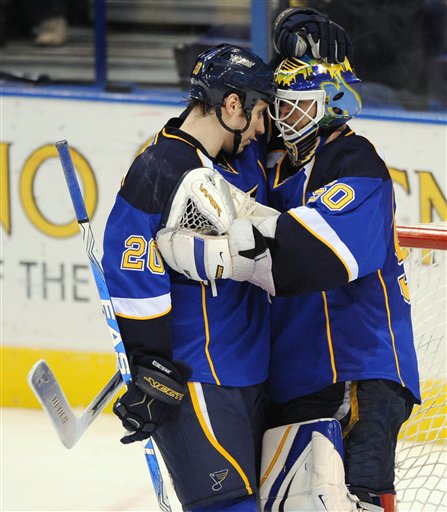 "I'm glad I'm wearing this mask, otherwise that thing could put an eye out."

After two periods the Kings really took the game to the Blues and had the best chances and most sustained pressure yet the game still stood scoreless. And then in the third period the Blues turned up the pressure, increased the physical play and saw rookie Patrik Berglund score two ugly goals for the 2-0 win. It wasn't a pretty win, but playoff victories aren't always the most aesthetically pleasing.

"The key was we stuck with our game plan and got the win," head coach Andy Murray told the media after the game. "That's what we talked about after the 40 minutes. This isn't gymnastics. We're not looking for style points, we're looking for two points."

Mason was the No. 1 star of the game and was the first to receive credit from Berglund in a post-game interview with Fox Sports Midwest's Dan McLaughlin.

"Successful teams have good goalies and right now we're successful and he's just been playing unbelievable. Hopefully we keep going and collecting points and make the playoffs," Berglund said. When asked about his two scores being easy, Berglund responded with a smile, "They were kind of open nets, but a goal is a goal."

On the first score, David Perron held the puck on the power play on the left wing. He skated towards the point and then suddenly changed direction, driving down the wing. He put a solid wrist shot just wide of the net, but it was hard enough that it took a strong bounce, came out in front to a waiting Berglund who saw all net and no goaltender.

On his second goal, Berglund was in the right place at the right time again. On the play, the puck came down almost the length of the ice. TJ Oshie skated hard in a battle for the loose puck and created the turnover. The puck bounced to Berglund along the right wing boards. He fed it across to Perron who this time got the shot on net. Kings goaltender Jonathan Quick slowed the puck down, but couldn't make the save as the puck trickled behind him. Oshie was there to start a scrum and Berglund swooped in during the clutter of body parts and sticks and tipped it into the vacated net. Credit the referee for having a good view of the play through the net and for not blowing the whistle with the puck in a mashup of bodies in the crease.

"We've worked awfully hard to get to this point and it's a great feeling to play these games. They're all do or die. It's just a great feeling to keep going," Mason told McLaughlin after the game on FS Midwest. "This is our playoffs. We need to win here to get into the playoffs."

At one point in the third period, the Blues were shorthanded and the Kings were threatening. A shot from the left wing came in on Mason who was down in the butterfly. He caught the puck with a little bit of a flourish and froze it for the faceoff. Defenseman Barret Jackman, one of the few Blues players to have actually played a playoff game for St. Louis, tapped his stick on Mason's pad and offered a few quick words of encouragement. That's the type of thing you see in a postseason game, not one in March.

As Blues fans, we're getting treated to an exhilarating ride. The atmosphere promises to be fucking electric at the arena Thursday night with the Blues on the cusp of seventh AND eighth place in the conference. We can only watch and cheer and worry and hope and worry and worry some more. The players, hell the players get to actually do something about how this surprising season is going to end. Just listen to a beaming Mason talk about how he isn't tired after starting every Blues game since Feb. 3.

"I feel great. This is awesome. You find the energy," he told McLaughlin. "This is every hockey player's dream to play in games like this. I love playing with this team and we're all working together doing an awesome job. It's just so much fun."

Amen, man. Now pass the antacids, I think I'm getting an ulcer.