Share All sharing options for: You Write The Comedy - Victory Wednesday Edition

On the Blues' second goal in Tuesday's 2-0 win over the Los Angeles Kings, the Blues had a rather young lineup on the ice.

The average age of those five players: 22.4. Jackman is the elder statesman who just turned 28 last week. As you might expect, there was some youthful exuberance after the goal. With three home games in five days, you might imagine that the insane people who put stuff up on this site might be a little busy with the fan-run paper we sell outside home games. So to fill a little bit of your afternoon, tell us in the comments what might be happening in this photo of the youngsters celebrating. 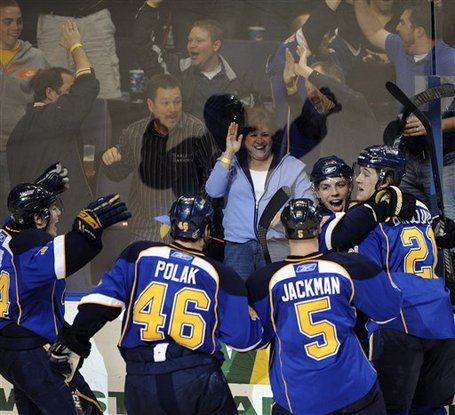 "I can't wait to put this on my Facebook page!"