Share All sharing options for: Coronation For King Oshie

It has taken less than a full season for rookie TJ Oshie to ascend to the throne as king of St. Louis. Look no further than Thursday's 4-2 win over a dangerous and talented Vancouver Canucks team. 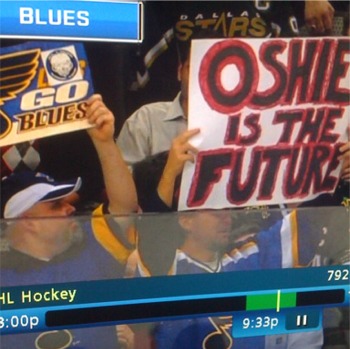 Those guys were freaking psychic.

Oshie was named No. 1 star in the win with a goal and an assist. The guy sitting behind me in 113 said he would throw my hat on the ice if Oshie got a Gordie Howe Hat Trick. It didn't happen, but there was no doubt that Oshie helped the Blues take charge in that game, a game they couldn't afford to lose and still be relevant in the playoff discussion.

The Blues trailed 1-0 after the first period, but was slowly choking the offensive chances for Vancouver. After the Canucks quickly reached seven shots in the first period, they were stuck at that total well into the second period. Three minutes into the second period, Oshie pounced. He carried the puck in deep, skated around not one but two defenseman and found himself all alone with Roberto Luongo. Man vs. man child, the man blinked. Luongo sprawled as Oshie carried the puck past the crease and towards the corner. With the all-star goaltender lying on the ice, Oshie shoveled the puck into the net for the game-tying goal. About three minutes later Oshie was killing a penalty and assisted on David Backes' shorthanded breakaway goal.

In the postgame media scrum, Post-Dispatch reporter asked Backes, "Is Oshie Superman?" And Backes didn't even smile at the question.

"He just might as well be. He's energetic, he's fresh out there. I don't know what was wrong with him. He was sick today and he had all that energy. He's just doing it all. For a young guy, that's just great to see. Hopefully they lock him up for about 20 years here," Backes gushed. "He holds on, holds on, holds on, steps through two veteran defensemen and gets one of the best goalies in the game to go down and out.

"Unbelievable goal by him, it gets all the guys going. He's the motor for us and we need him here going down the stretch too."

After the Backes goal with the young pair catching their breath on the bench, the crowd broke into a spontaneous, "Oh-she!" "Oh-she!" chant. It gave me goose bumps. It was honestly a surreal moment. When Rutherford asked him after the game about the crowd's reaction, Oshie struggled for a moment with how to answer the question.

"It's a...that's unreal," Oshie said. "It's one of those things when you're younger you imagine the crowd screaming your name. To happen my first year, it's something else."

Here's the thing about Oshie that has quickly endeared him to Blues fans: he simply does everything. During Thursday night's game, Oshie was introduced on the starting line with fellow rookie Patrik Berglund and second-year man David Perron. He played the right point on the No. 1 power play unit. He killed penalties. He loves to play the body and put a good body check in the neutral and offensive zones. Even carrying the puck in traffic he initiates body contact. He can shoot the puck. He can pass the puck. He's fast. The chicks dig him. He's young. He's got a first-round pick contract. And finally, he's living in St. Louis after calling North Dakota home for three years.

It's uncanny that the guy has the patience to wait for Luongo to flinch and then later admitted the play he attempted was exactly what he planned.

"Actually right after I went by someone at the blue line I was actually thinking about that move because their wide defenseman was already turned skating back so I knew that move would be open," Oshie said. "I was hoping I wouldn't make my angle so bad that I didn't have any net to shoot at."

Maybe he is Superman.