Share All sharing options for: The Hockey Prof's Blues Mixology 101

Being a Professor of Philosophy I am often asked important, life-altering questions such as:

However, there is one agonizing question that has been here-to-now unanswered by any philosopher or semi-disreputable sports blog, "How does one show their support for the St. Louis Blues while at the same time abusing their liver to the utmost?"

One possible answer to this query is to simply drink a St. Louis made beverage.  This is a tried-and-true but problematic approach for Blues fans. For starters, Anheuser-Busch products are so commonplace as to be boring. Additionally, their long association with the St. Louis Cardinals really precludes them from being seen as a Blues-connected product.  Plus there is the embarrassment we have all felt whenever the seventh inning stretch arrives and folks in Busch Stadium rise as one to join in a lusty chorus of, not "Take Me Out To The Ballgame," but "When You've Said Bud You've Said It All." That is a shame that should, like incest, stay in the family and not be flaunted publicly.

There are, of course, the St. Louis-made Schlafly brews, but those are hardly an option for anyone not living in the St. Louis area. No, we need something that will cause people to think "What the fuck is that crazy loud-mouthed asshole drinking?" whether they are in Missouri or not.

So, if we do not want to be limited by geography, we will have to move to more generally available products. This leads us to blue cocktail ingredients, and really there are two main options:

First, one could go with some sort of blue colored flavored vodka, like UV Raspberry Vodka. 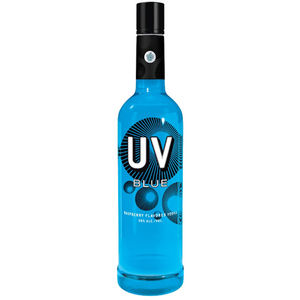 I must admit I've never tasted a raspberry vodka, mostly because I think I'd rather have my eyes gouged out with a rusty butter knife first, but I'm throwing it out there for those who have even less dignity then the rest of us. Availability in some bars might be a problem with such products, so you may want to stick with a more widely available ingredient.

That ingredient is Blue Curacao. 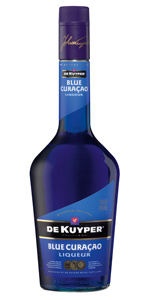 Now, I know what some of you are saying, "Blue Curacao?!? I'm not drinking anything with a fucking umbrella in it, unless I can be guaranteed I'll get laid as a direct result." But, never fear!  Would the Hockey Prof steer you wrong?

After years of painstaking research, hour after agonizing hour spent in bars, pubs, gin joints, speakeasies, taverns and dives, I have found the three (or four) best ways to support the Blues via alcoholic libations:

1)  The Aqua Velva:  This drink was made semi-famous in the movie Zodiac.  However, they mistakenly gave the impression this was a drink one could simply order at a bar. Normally it isn't, unless you know a really cool bartender, but it is great for a home playoff game party.

Muddle the mint into a pulp and mix with the vodka in a (Chris) mason jar. Stash in the frig overnight or for several days. (The longer it sits the minty-er the vodka will be.)  Strain the mixture into another jar to remove the mint leaves. When ready to mix/drink, use a rocks glass filled with ice, pour in 2 ½ oz. of the (now green) vodka and stir in ¼ oz. of blue curacao.

1A) The Aqua Velva (Alternate Take): This drink one could order in a bar, but it is a little fruity unless the Hockey Prof. Variation is employed.

In a cocktail shaker filled with ice add:

Shake. Strain into double rocks glass, top with ½ oz. 7-Up.  Add cocktail umbrella emblazoned with Detroit Red Wings logo. Take umbrella out of cocktail.  Set fire to umbrella and throw on floor. Take out penis. Piss on burning umbrella so that the charred and urine-stained logo is still recognizable. Place in envelope and mail to the Detroit Red Wings c/o Joe Louis Arena.

2)  Windex (shooter):  This drink is for anyone who wants to get drunk fast. Yes, yes, I know, that is all of us sometimes.

Shake with ice, strain into shot glass, raise glass and say "in Gassoff we trust," down it. Repeat as necessary.

3) The Monday Night Miracle:  This drink is my own invention. Friends of mine, who have had one too many of these, have dubbed this "The Blue Nightmare" but I figured that only meant they were Flames fans.

Shake with ice. Pour in rocks glass. Drink to victory.