Blues Just Can't Do It The Easy Way

Share All sharing options for: Blues Just Can't Do It The Easy Way

That was the thought when Gallagher and I talked right after a heart-stopping 4-3 shootout win over the visiting Columbus Blue Jackets. The Blues had a 3-1 lead in the third period and looked to be in control. And then two goals in a little more than 90 seconds and suddenly Rick Nash was celebrating and the Blues were worrying.

Then of course it took the Blues their fourth shooter, David Perron, to net the winner. End result: Blues have 81 points. Edmonton has 81 points. Nashville won, so they have 82. So in other words the Blues have for the first time since crawling back into contention touched the eighth-place team in points. Unfortunately, Edmonton won four times against the Blues (twice after tying in regulation) and that would be the second tie breaker after the teams are tied with regulation wins.

But seriously, who just a few weeks ago thought they would really see this below: 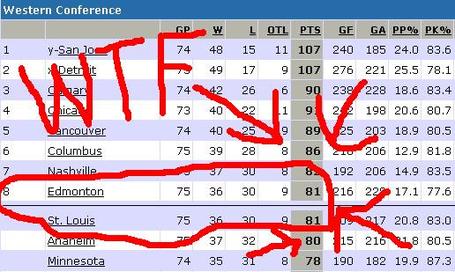 We'll put up the highlights and interviews in a bit. Can't wait to hear them talk about the massive hit TJ Oshie put on Rick Nash after skating out of the penalty box. That was Oshie's way of saying, "Hey Columbus, we're beating you on the scoreboard, now we're going to beat you on the ice too." Of course they promptly gave up two goals after that, but we can conveniently overlook that.

UPDATE: Here are the interviews:

And Blues fans, before you fill up the comments, a quick vote. And remember to come back tomorrow for the rematch in Columbus. Promises to be a spirited affair.