Well, here we are, right on the cusp of the roadtrip we've been dreading ever since the Blues began their rise from the 15th place in the Western Conference. With seven games to play and all but one of them on the road the Blues are tied in points with eighth-seed Edmonton. The chance to jump into playoff contention is in their hands, as DJ has shown us graphically. 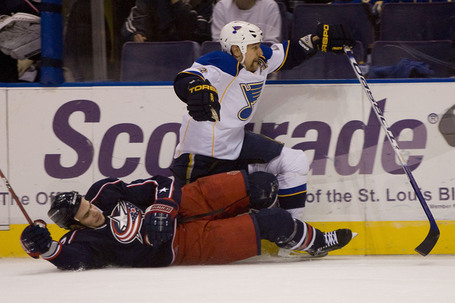 Jackets defenseman Rostislav Klesla is apparently dinged up and might not play today. Wonder how that happened?

Thanks to Jeremy Rutherford's early a.m. Tweet, we know that the Blues checked into their Columbus hotel a mere 14 hours before the drop of the puck. The only positive to take away from this (other than the fact that we're finally getting something useful out of Twitter) is that the Jackets probably all hit their own respective pillows at least as late as the Blues.

Expect the game to look very similar to last night's game, including the goaltending. We need a superior effort from our Mason over their Mason (or as the guy in front of me was calling him last night 'Inferior Mason'). We need everyone hitting and everyone going to the net and getting lots of shots on net.

Also, for the scoreboard watcher that has grown quite large inside all of us, we want Nashville to lose (Detroit), Edmonton to lose (Minnesota) and it would be helpful if Anaheim would lose (Colorado) as well. The Nashville game will be going at the same time as the Blues game, but the other two kick off at 7 central time. We may put up a Scoreboard Watchin' post if there is interest from the crowd.

We all know the deal for today. The Blues have zero room for error. As Tony D'Amato told us this morning, this game and life itself comes down to a matter of inches. The Blues have to battle for each and every inch if they are to live on with this playoff dream.

Game is on FSN-Midwest, KMOX and hopefully some helpful feed will show up in the comments. This is your game day thread.