Share All sharing options for: Blues In Eighth Place

When we started this ride, the playoff hunt didn't seem quite real. I smirked writing about how the Blues were just seven or five points out of the playoffs.

Sure, we'd humor ourselves, put some weight in the Blues games and then just wait until the NHL draft lottery. I wrote about how Andy McDonald returning from injury would be important, that good goaltending would make a difference and the Blues were dangerous. How much I believed it at the time doesn't matter now because if the season ended today...the Blues would be in the playoffs. Holy. Crap. 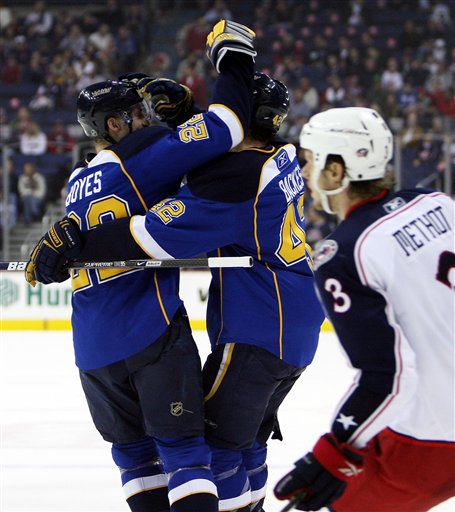 After a tremendous 5-2 win at Columbus Sunday, there should be no doubt about a couple things with this team.

First of all, there's a rivalry brewing. About time. TJ Oshie vs. Rick Nash is something we can get behind. In case you missed it, Oshie was obviously gunning for a big hit on Nash Saturday night in St. Louis. And he got it in the corner after a penalty on Oshie had just expired. Sunday evening in Columbus, Nash found himself all alone with Oshie who happened to have the puck. It was payback time. And Nash was going to teach the rookie a lesson. Except the pupil changed the lesson plan.

Oshie had his head up (the opposite of Nash the night before) and saw the big Jacket coming. He seperated himself from the puck, put his weight behind his shoulder and instead put the hit on Nash. Here's the video:

I love how the Columbus announcers change their story about how it was an illegal hit by Oshie. Sorry, sirs. He just blowed your guy the fuck up.

Second, if there was any shred of doubt about the value of David Perron, Patrik Berglund and Oshie to this team or as a line, it's gone now. Thes guys provide the offensive punch, the jump, the tenacity this team needs to compete. Without them, they're still far on the outside looking in.

Finally, there should be no question this team and its pursuit of the playoffs is real. Anyone with doubts, bring them. This team will silence them, game by game.

Now, if they could get a little help from teams playing Anaheim and Nashville, Blues fans could actually enjoy this stretch drive without developing ulcers.

Look for the usual links, a column from one of us and some other fun stuff to try and kill time between now and Wednesday night. The Hawks have choked away their hold on fourth place in the conference. It'll be interesting to see how they respond when St. Louis comes to town.