Win a few games, get a couple points out of the playoffs, mix in some rumors about reacquiring one of the franchise's most well known players in the league and all of the sudden the Blues are a story again. And a positive one at that. Go figure. 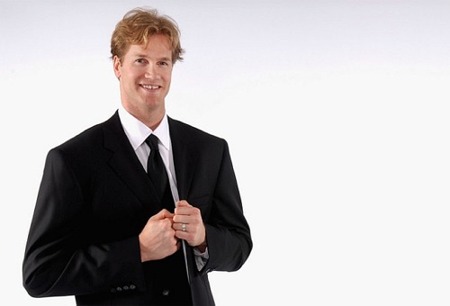 My elbows are always ready to crack your skull.

Here's what Greg Wyshynski (known as Puck Daddy over at Yahoo! Sports) said about the Blues right now:

First, a word about the Blues: bizonkers. The franchise is playing one of the most important home games in years tonight against the Detroit Red Wings, in what could be the first playoff atmosphere in St. Louis since ... well, since Pronger was on the team. They're a great story, and like some other Western Conference underdogs, you can't help but hope they earn a postseason berth. Plus, it's nice to see Chris Mason steal someone else's job again after getting his stolen in Nashville.

Yeah, floored me too. Wysh also weighed in on the Possible return of Pronger saying the Blues' former captain makes sense on the ice, but not when $20 million of the team's salary next season would be committed to defense. He closed by saying if a deal doesn't happen by Wednesday afternoon, maybe it goes down over the summer.

We've kind of stayed away from the Pronger scuttlebut around here because blabbering on about trade rumors can get really, really tedious. But as we're now less than 30 hours to the trade deadline, it's kind of the big gap-toothed elephant in the room.

Part of me says make the deal. He's the missing link in the transition game and would make an already potent power play deadly. He's won a Cup and been to another Final. He brings an attitude to the ice that is a perfect match for this physical team that wins by imposing its will on the opponent.

Then the other part of me says the big fella has a history of making bad decisions on the ice when it comes to physical play. And he's part of the past when this team has been pointed at the future since he left four seasons ago. And the money committed to defense next season is daunting. Damn you Jay McKee and your apparently untradeable contract!

Fans would love it, especially the people around the area who are only casual Blues fans at best. They all know Pronger. They'd probably wonder when the team is trading for Al MacInnis too.

Would Pronger make the Blues better? Yes. Is this the right move for this franchise at this time? I have no fucking idea.

How about you? Answer the poll. Discuss it down in the comments. And remember to come back for the Detroit love fest later.