Share All sharing options for: Home-Grown Players Leading The Charge For Blues

As a Blues fan, I am predisposed to believe that prospects coming up through the organization will not live up to their expectations. As former President George W. Bush once wisely said, "fool me once, shame on, shame on you. Fool me, I can't get fooled again." Truer words have never been said.

Denny Felsner. David Roberts. Jeff Batters. Jason Ruff. Nathan Lafayette. Steve Staios. Maxim Bets. Daniel Corso. Marty Reasoner. Jeff Taffe. Over the years this collection of stiffs, no-names and journeymen were all at one time or another prized prospects of the St. Louis Blues. There are more names I didn't dredge up. The Blues had one of the worst talent pipelines in the NHL unless you needed a sixth defenseman or a third or fourth-line winger. But things have certainly changed with this current front office of the St. Louis Blues. 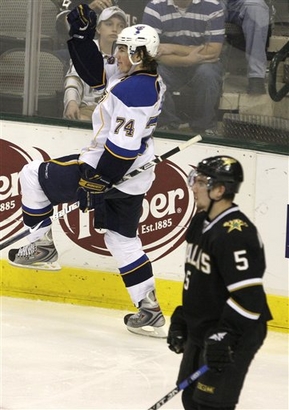 Pardon me while I celebrate.

Any award that would be given to the NHL executive of the year should go to Jarmo Kekäläinen, assistant Blues general manager and director of amateur scouting. Since he joined the Blues, the team has drafted: David Backes, Lee Stempniak, TJ Oshie, Ben Bishop, Erik Johnson, Patrik Berglund, Jonas Junland and David Perron who have all seen important ice time for the Blues and who mostly figure into the Blues' present and future. And that doesn't include players like Lars Eller and Ian Cole who could be with the team as early as next year.

For the first time in more than 20 years many of the best players on the team actually were drafted and developed and promoted by the organization. What a crazy concept! And boy is it paying off. Sunday night the Blues played a statement game against the Blue Jackets in Columbus. And that statement was, "Surprise, you're still not better than us!"

The Blues swept a rare home and home series with a  4-3 shootout win in St. Louis Saturday night and then kicked come Blue Jacket ass with a commanding 5-2 win Sunday. For the first time in five years, the Blues have a five-game winning streak. The Blues are also a serious threat for the NHL playoffs for the first time in that same time span. Meanwhile Columbus has come back to the pack in sixth place and is only three points ahead of the Blues in eighth.

The win Sunday was powered by the youngsters: Perron, Oshie and Berglund. Each scored a goal in the win and totaled four assists. In the last four games, they have combined for 19 total goals and assists. And Oshie set the tone again with his physical play against the Jackets' best player, Rick Nash.

Oshie took a run at Nash Saturday in St. Louis and blew the Jackets' captain up with a hard hit. Sunday, Nash was looking for revenge. He went after Oshie who happened to have the puck. Instead of just taking the payback, Oshie separated himself from the puck, got his weight behind him and knocked Nash on his ass. Those kinds of plays led the Columbus fans to boo Oshie every time he touched the puck. That's cool, he probably got a kick out of it.

A quick look ahead at the schedule shows this will be a tough week again for the Blues. Wednesday they travel to Chicago. One night later they play at Detroit. Saturday, it's at Dallas. Only seven games are left on the schedule. Because of games on the schedule on Tuesday, the Blues are guaranteed to be in ninth place with a game in hand come Wednesday night. Chicago and Detroit are still jockeying for playoff position and will be difficult opponents.

This thing isn't over. The next two weeks will be exciting and thrilling and never-wracking. Damn I missed meaningful hockey.