Welcome To The Playoff Atmosphere

Share All sharing options for: Welcome To The Playoff Atmosphere

[This article originally appeared in the Mar. 28 issue of St. Louis Game Time. It relates to my experience at the Vancouver game on Mar. 26, but we feel like it's pertinant for every game at this point of the season.] 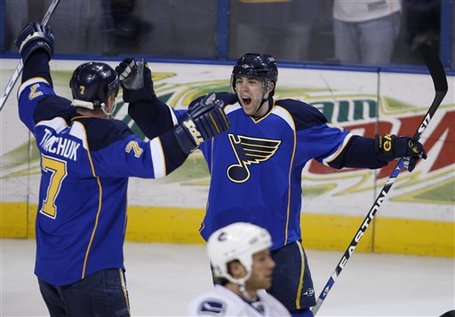 This was about the first time I truly exhaled.

Thursday night blew me apart. As a fan of this team whose personal history with the team started during the 25 years of consecutive playoff appearances, I've never had to struggle/celebrate through a full-on playoff race. As such, going to a game like Thursday's where getting the two points available are basically mandatory was pretty stressful from start to Andy McDonald-sealed finish. I don't know how crazy it was for you, but here's how my night went:

10:34 remaining; 1st Period: This is about the time I can usually get into the building after closing up shop outside and making my way past all the beer vendors that seem to know my name despite the fact that I don't recall meeting any of them. As I fight my way past all of them I try to catch a glimpse of the TV screen that is showing the score over in the ‘Greasy Beef Sandmiches' concession stand outside Sec. 103. That place always makes me think I'd love the taste of what you can get there, I just can't afford to put on 15 pounds in the first 15 seconds I'm inside the place.

But they also happen to have the first spot where you can see what the score of the game is. Outside we can usually hear the horn for the start of the game and if the Blues can get an early tally we hear that about 75% of the time. Other than that, being a creature of the last four years' habit, if I haven't heard the horn I assume that the Blues are losing by the time I get in.

It's one to nuts by the time Son of GT and I break through the beer vendors. Knowing that it's Vancouver and Roberto Luongo, I fire off an audible, "Fuck."

"Nothing," he says, "I said ‘Fudge' because the Blues are losing."

I stare at him as we walk to the escalators.

"You think Towel Boy celebrated it?"

I really shouldn't be bringing this kid to hockey games.

9:07 remaining; 1st Period: After waiting for a whistle, we finally get into our seats, wondering if we're going to see another Luongo shutout. I'm already thinking about how long the walk to the car is going to feel if the Blues lose, Son of GT is swearing like a sailor trying to win a contest, some random-assed Canuck fan is taunting me and the Blues are now 67,000 points out of a playoff spot.

I never said I was that positive of a person.

In the remaining nine minutes of the period it seems like the Canucks are in the Blues' zone virtually the entire time and have fired on 25 quality shots. The Blues have managed to clear the zone only twice and both times the players on the ice for the Blues break their sticks, leaving them essentially shorthanded. In reality, the Note outshoot the Canucks 12-7 and have been awarded three power plays to the Canucks' zero.

Welcome to the playoff atmosphere, hockey fan. Say goodbye to your fingernails.

18:48 remaining; 2nd Period: After being stuck in the concession line for about 15 minutes waiting for two people to service about 50 people and then being awarded the privilege of paying $8.75 for a soda and a small popcorn (extra husks please!) to suit the tastes of the newly-potty-mouthed Son of GT, we wait for a whistle and clamber back up to our seats. The ladies next to us who hand out candy whenever the Blues score make mention of the fact that it seems like a long time since they've handed around the candy.

"JINX!" my mind is screaming.

"JINX!" my son is screaming.

I could post this video every day and not ever get tired of seeing it.

16:57 remaining; 2nd period: I'm not entirely sure I saw what I just saw. What I am entirely sure of is that I am vigorously slapping hands with everyone within about five feet of me. I'm also pretty sure that I'm screaming unintelligibly in their faces. This includes the Sally who is sitting directly behind me with the Nouveau-mullet who has been annoying all of the regulars with his ongoing game commentary.

Yes, we know that was a nice cross-ice pass. Yes, we also know that the man down low is open. Yes, we know that Weaver is number 43 and he just made a good play. Yes, we also all know we want you to shut the living fuck up. Just because you're busting the freshest leather Bluenote jacket I've ever seen in person does not mean that we give a shit about your pseudo hockey knowledge.

I will, however, ignore all of that for one second in order to slap your hand red after that silly Oshie goal. 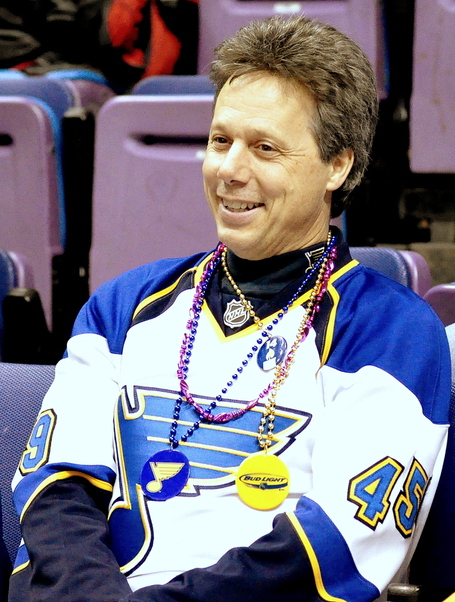 Seriously, why not jump already?

16:04 remaining; 2nd Period: Pretty sure Son of GT just called him "Towel Douche." Also pretty sure there's no way he actually knows what a douche is, other than it's something you don't want to be. Also pretty sure I need to make sure he knows not to say that in front of his mother.

14:15 remaining; 2nd Period: Silent Jay McClement gets called for a penalty that my fellow fans and I deem to be what they call in academic circles "bullshit." I've been a Blues fan long enough to know what's going to happen here; the Blues are about to be chasing once again.

14:01 remaining; 2nd Period: Parents, put your children to bed. Holy fucking goddamn asslicking shit! David Backes finishes what TJ Oshie starts by breaking away to finish a shorthanded goal, putting the Blues in the lead. A perfect play by the two guys on this team who could legitimately get away with murder in this city and walk out of jail with the cops patting them on the back team up to put the Blues in the lead. It's the first shorthanded goal for the Blues since 1975.

Welcome to the playoff atmosphere, hockey fan. Say goodbye to being on the wagon.

10:15 remaining; 2nd Period: Someone just let all of the air out of the building as one of the shittier Canucks just banged in a rebound causing everyone around us to further fill Son of GT's ‘Bad Words Vault.'

The score may be tied, but that team still has Luongo in net and like 37 really good Swedish and/or bald guys on the ice. Considering that Luongo has looked bad on two goals already, I'm not confident that the Blues will be able to crack him a third time. It feels like the Blues are losing by 10 goals. I haven't used more than about three inches of my seat yet.

Welcome to the playoff atmosphere. Say goodbye to sanity.

9:35 remaining; 2nd Period: Andy ‘Happy Meal' McDonald has just been called for a tripping penalty. In the professional opinion of my sectionmates and me, the referee may have made an error in judgment. He may also be romantically involved with various farm animals if what I'm hearing is correct.

I use even less of my seat for the next two minutes.

7:19 remaining; 2nd Period: Keith Tkachuk has just pushed a Sedin and caused him to reach some sort of tipping point, causing the Saturn-headed Swede to pinwheel 12 feet into the boards. As the Blues go back on the penalty kill, we are certain that the plot to destroy the Blues is well underway. The crowd is frothing at the mouth and Son of GT is making up threats that don't even make sense anymore. I'm at once proud and frightened.

The penalty gets killed and despite some more chances each way, we're heading to the third period tied up. For whatever reason, I'm starting to feel positive. The creepy Swedes have looked pretty ineffective so far and Luongo hasn't looked perfect. Maybe he just realized that ‘Bobby Lou' might be the gayest nickname in all of sport and it has shaken his confidence.

18:53 remaining; 3rd Period: Someone in the NHL offices must have heard that the scrappy Blues are a good story and called the officials during the intermission, because that goon Pavol Demitra has just been thrown in the penalty box. I think I just peed a little. 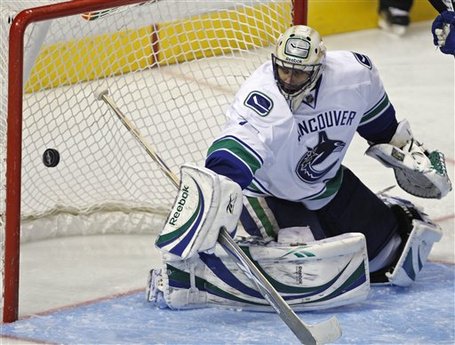 Oh, too bad, Bobby Louise! You almost had that one, too.

17:02 remaining, 3rd Period: FRENCHIE! David Perron has just deflected in a Tkachuk pass and the roof is in danger of being blown right off the barn. It's possible that I've broken my hand slapping strangers' hands as hard as possible, the ladies are passing the candy and it's time to scream "JUUUUUUUUMP!" one more time.

Welcome to the playoff atmosphere. We all have to play hurt.

13:45 remaining; 3rd Period: The guy sitting right in front of me started the "We Want Playoffs" chant earlier in the game and now it's catching on everywhere. At this particular moment all I can think is that this would normally be the time when the Blues would give up a back-breaking goal, shut the crowd up and begin the collapse that would have us all going home pissed off.

Have I mentioned that I might not always be the most optimistic person? You really can't blame me though; I have been a Blues fan for over 15 years.

6:18 remaining; 3rd Period: That diver piece of crap Burrows just drew another penalty. I'm now convinced that the referees are trying to screw the Blues. I check the GT Ref Stats and find that one of the guys out there, Ian Walsh, has worked four Blues games this year. Their record in those games is 0-4-0. We are fucked for sure.

And then something strange happens. We are not fucked. The kill does a great job, Chris Mason doesn't not let in a bad goal, the machine continues to churn. I can't believe that I'm allowing it to happen, but I'm no longer waiting for the worst to happen. And then amazement is added to incredulity...

2:23 remaining; 3rd Period: Mats Sundin has been called for a penalty. I can't be completely sure, but the refs may have either forgotten which team was which or else they heard the threat from the guy in my section who wants to rape and kill them.

On a side note, I think the threat was real.

:49 remaining; 3rd Period: One of the Epcot-headed Swedes just took another penalty and the Blues will be 5-on-3. I think I just exhaled for the first time in over two hours. Just 15 seconds later Happy Meal buries Brad Boyes' sweet pass to seal the game.

It's impossible to say what the best part of the last minute was, but our entire section was standing and cheering and when the time came for Towel Dick to do his ‘look at me' routine the crowd was howling to hard and too long to recognize him, no matter how long he tried to hold on.

I'm physically drained as we walk out of the building and head home. I haven't left a hockey game feeling this tired in a long time and I don't know if I've ever felt this tired after simply watching a game. Usually when I'm this wiped out, I've been playing in the game.

The worst part is that no matter how tired my body is, my mind is wired. When I get home there's no way to sleep. After spending time on our website basking in the victory and then getting a head start on today's paper, I find myself exhausted and wide awake at nearly three in the morning.

Welcome to the playoff atmosphere. We didn't promise you a rose garden.