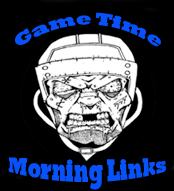 I feel like George Michael. That game was not pretty. Once again, the Wings show that this "rivalry" doesn't exist -- the Red Wings are the better team right now and the Blues are still at the kids' table. Ugh. On to the links.

Last night sucked, but at least this didn't happen.

That's it for today, come back later for all the deadline coverage you can handle. Rememer, if you have links you want to share with the rest of the class, send them to gametimelinks (at) gmail.com.