So I still feel like complete crap after last night's thrashing at the hands of the Detroit Red Wings. Not a fun night. But this blog train keeps a rolling all day long with the traded deadline approaching at 2 p.m. St. Louis time. 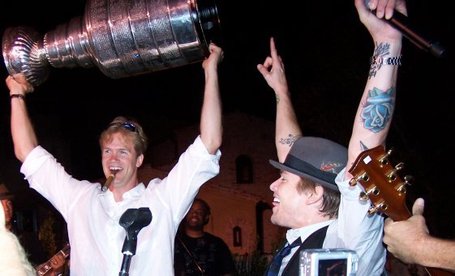 Apparently, Chris Pronger is not moving today if you believe Canadian media. No word on if Ducks fans are going to burn his furniture for staying. So that was a fun couple days dredging up all the hard feelings over his departure from St. Louis while the franchise was up for sale. But judging by our informal poll yesterday on the site, most Blues fans didn't want to see a promising young player leave for the big defenseman anyway. And you never know, Pronger may be back on the block this summer or at next year's deadline, most likely at a cheaper price.

Boss, my TPS reports might be a little late today.

Say you want to follow what's going on during this trade deadline day (like monkey boy Pascal Leclaire getting shipped to Ottawa), we've got another destination for you. The SB Nation hockey blogs will be posting stories with trade news and reaction all day. Go to the trade page and read a bunch of stories. The day will fly by.