Share All sharing options for: Keith Tkachuk Remains A Blue-UPDATED

UPDATE: Jeremy Rutherford says the Blues were not overwhelmed by any offers for Tkachuk and elected to keep the veteran. 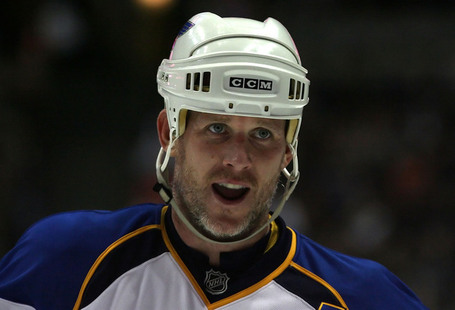 According to Jeremy Rutherford, it kind of looks like Tkachuk wasn't getting moved around noon.

12:14 pm: Blues forward Keith Tkachuk left Scottrade Center a few minutes ago. I asked him if he’s been asked to waive his no-trade clause, Tkachuk said flatly: "No."

So let's just assume (and we'll update this if news changes) that Tkachuk is still a member of the Blues organization. I think it was about the only thing the franchise could do and still maintain credibility with the players in the dressing room and the fans in the stands. Even though they got trounced last night, the season isn't over. Trade Tkachuk, you wave the white flag.

Of course there will always be a segment of fans who say build for the longterm, get some prospects or picks for him. I don't think that opinion is wrong, but I think it ignores the reality of the situation for the Blues were they can't exactly tap out like a bloodied MMA fighter. They have games to play, games they will try to win draft status be damned. Winning the last week tied their hands.

So what say you commenters? Happy he's still here? Disappointed there isn't another second or third round pick in their back pocket come draft time? Tell us in the comments.