Getting To Know Danny Richmond

Share All sharing options for: Getting To Know Danny Richmond 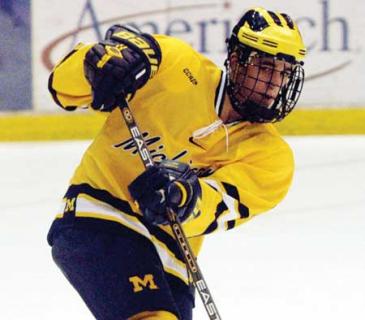 But what more is there to know about Danny Richmond other than the fact that he's a 24 year old defenseman, one-time student of Red Berenson's hockey coaching, former second round draft pick who has fewer than 50 NHL games to his resume. What more can we find out about the Chicago-native before he gets a chance to put on our beloved Bluenote?

Well, lucky for us, more and more players are taking to the internet and blogging. Unfortunately for us all, Danny apparently gave up the highly lucrative hobby of putting words to computer screen two years ago, right about the time he got demoted from the Blackhawks to the minors. But hey, at least he made four posts before deciding it sucked.

You can check out the Danny Richmond homepage for all of the details, but some interesting quotes from the entire DR catalogue include

This year has been pretty interesting so far for me, and I have been learning a lot. I grew up my whole life playing defense. In the beginning of training camp, my coach told me I will be playing left wing as well.

I'd like to say that this versatility is part of what the Blues were looking at when they traded for him, but Richmond's very next post indicates that maybe that transition didn't go too well.

...sorry it has been so long since I have posted. It has been a long few weeks for me and I didn't feel like my head was in the right place to write a blog for you guys. I am back now and will be giving you all regular updates on my season. Thanks for understanding!

About 3 weeks ago, the Blackhawks informed me that they had placed me on waivers

Whoopsie! Maybe our heads wouldn't be in the right place either after that. Plus, there's a little bit of an adjustment that goes along with transferring from blogging via wi-fi in the swanky five-star hotel with the NHL team versus the way things go in The A:

Post game meals on the Hawks jet are very nice. We usually get our choice of a nice steak or chicken of some sort. In the minors, it is a totally different story. We place our orders from a sandwich shop as soon as we get to the rink for the game. They usually deliver the sandwiches during the second period. The perfect amount of time for them to become cold and soggy! It is pretty hard to choke those down, so I usually rely on about half my sub and big protein shake.

Based on the opinions of our GTPD on the 'skill' of Wozniewski, we're probably all willing to go along with any trade the Blues make for a younger guy who still has the potential to join the big club in some manner in the future.

Whether Richmond has a chance to crack the lineup in the coming years or not probably has a lot to do with how motivated he can stay and how long it takes the second-tier Blues defensive prospects to develop, but we really hope that Richmond takes up blogging again as a hobby.

Telling the world about the differences between the NHL and the AHL might get a little depressing, but it's a more interesting read for hockey fans than he might realize. Even if he does have to work harder to get new posts up from time to time.

I wanted to update this sooner but we have had one heck of a week with travel, and I left my laptop in Rockford. I am currently sitting in the business center of the Courtyard Marriott in freezing downtown Grand Rapids Michigan.