The Blues have already beaten the Panthers once this year, back in October at the DrinkScotch Center. That 4-0 shutout was shared by Ben Bishop and Marek Schwarz (Manny Legace was out with carpet knee thanks to Sarah Palin and Chris Mason was out due to an emergency appendectomy; what a year it's been). It pushed the Blues' early record to 5-3 and dropped the Panthers to 4-4.

So, not much has changed since then, right? 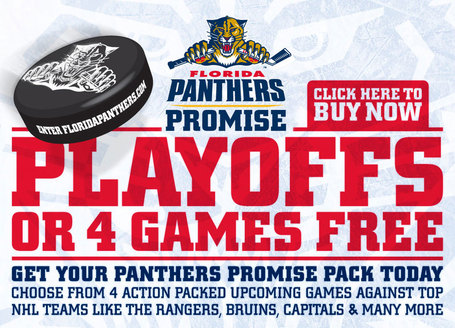 Oh sweet! The kiss of death! Thank you, Florida!

The Panthers have positioned themselves nicely at this point, hovering in the six spot in the Eastern Conference, nine games over .500. The Blues, of course, are the ones who are now battling for every available point just to stay within striking distance of the eighth seed.

What to watch for (Panthers):

What to root for (Blues):

Don't be afraid to check out our SBN Panthers blog Collossus, the Litter Box Cats. Great site, great guys, great senses of humor and they actually understand the give-and-take of fandom over there.

Yet another game on KPLR Channel 11, but this is your game day thread.