Share All sharing options for: Blues Let Two Slip Away

Hindsight is indeed 20/20 and right about now it'd be easy to say that after playing just last night and starting each of the last 15 games, maybe Chris Mason should have gotten the night off.

So we'll say it. Chris Mason should have gotten the night off. 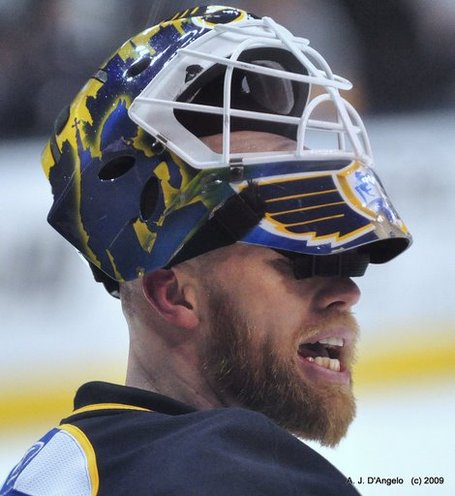 I'm so tired I can't even get this helmet all the way off.

What could have been hurt from playing Ben Bishop tonight? In his last NHL appearance he shared a shutout against these Panthers in St. Louis. He must have been re-called from Peoria to play at some point, right? Otherwise, shouldn't he be getting all the starts in mid-Illinois? Seems like one of the two back-to-back games would have been the right point to insert him.

But whatever. The Panthers are a much-improved team compared to the one that got decimated 4-0 by a much-different Blues team back in late October, so we'll just chalk it up to a better team beating a worse team on the second night of a back-to-back road game.

The Blues did manage to come back from two goal deficits twice, but just could never get back to eaven. It's too bad, too, because Minnesota lost and Anaheim did not play, so those two points not earned could have helped the Note jump those two teams in the standings.

Time to look forward now, not back. Huge homestand this week with the Stars Tuesday, Sharks Thursday, Red Wings on Saturday and Wild(s) on Sunday. Nothing easy to do there, but lots of ground to be made up if the Blues can string some wins together.

No post-game interviews for you, but our guess is that if you asked the boys in the room to describe how things went tonight, they'd describe something a little like this: