We're as big of a fan of rookie TJ Oshie as anyone. In fact we've written that we think Oshie could get away with some pretty wild things if he were so inclined due to his most-favored status.

Really, what's not to love about the kid? He skates hard, he hits, he battles, he can score some pretty goals (right, Marty Turco?) and he can make the nice set-up pass, too. We've said it and we know you've said it too, "The Blues just look flat tonight. I mean besides Oshie, of course." 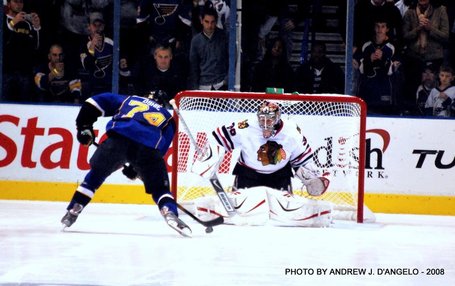 The beginning of the Oshie Era. This one is going in.

But if you need any more proof that the rest of the Blues fan nation has gone completely over the moon for the kid who has been alternately called The Teej, Oshie-wan and Furnace Face (all with love, of course), check out the latest online auction of Blues game-worn players' jerseys.

The starting price was $250 and players like Eric Brewer (the Captain), Chris Mason (the starting goaltender) and Cam Janssen (the hometown product) are still stalled at $260 bids. Players like David Perron ($310), Keith Tkachuk ($330), Brad Boyes ($330) and Chuck Norris David Backes ($380) are getting at least some decent action on the block, though they have ground to make up to catch Paul Kariya ($500) or even Patrik Berglund ($410).

TJ Oshie? The Teej has established his dominance at auction. If you want to get in on the bidding for the game-worn No. 74, you're going to have to pony up at least $2,070.

And no, that's not a typo. You can own this jersey, which is in fact the exact jersey that was worn by The Osh in that picture above when he scored his first game-winning shootout goal: 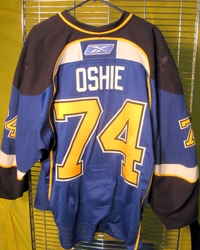 And it's even got this weird wear on it: 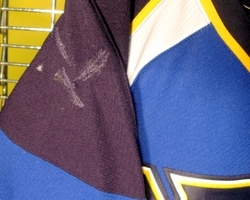 When we see something like that and then hear that Oshie's name came up in trade talk, it's obvious that the Blues did the right thing in not listening to that kind of offer. Trading The Osh at this point would be asking for a riot down at 14th & Brett Hull Way. Pitchforks and torches and everything.

That bid is pretty good for a guy who has fairly uninspiring stats in his first year. Like we said, we love the guy and really believe that he'll be a leader and offensive player on this team for a long time to come, but we're not breaking out two grand just to wear his jersey around, even if it does have some of his toothpaste on the shoulder.

Now, if he can come out with a better version of Rookie Cribs than his first attempt, maybe we'll talk.