We've asked a few folks to come in and give the St. Louis Blues some inspiration as the season winds down. And as a special treat, we'll let you inside the dressing room to hear the words for yourself. Before tonight's game against the Chicago Blackhawks, we've arranged for...a college sudent? I'm sure he's an honor roll student or president of student senate or something. Please welcome, John "Bluto" Blutarsky. 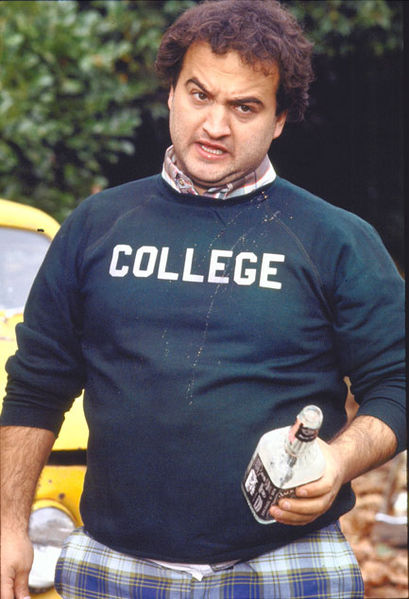 "Thanks, I needed that."

Bluto: What's this lying around shit?

Jay McClement: Well what the hell are we supposed to do?

Andy McDonald: The season's over, man. We're back in ninth place.

Bluto: What? Over? Did you say over? NOTHING is over until we decide it is. Was it over when the Germans bombed Pearl Harbor? Hell no! Was it over when Rick Johnstone screwed up his knee playing golf?

Bluto: It ain't over now! Cause when the going gets tough....The tough get going! Who's with me, Blues? Let's go! Ahhhhhhhhhh!

(Bluto runs out of the dressing room yelling. No one follows.)

Bluto: What the fuck happened to the Blues I used to know? Where's the spirit? Where's the guts, huh? This could be the greatest night of our lives, but you're gonna let it be the worst! "Ooh, we're afraid to go with you Bluto, we might miss the playoffs." You're facing the Chicago Blackhawks! And they suck! Have you seen the choke job they're pulling at the end of the season? Those kids are wetting their pants! You could take seventh place and show the entire league you're for real. Well, just kiss my ass from now on! Not me! I'm not gonna take this! Kane, he's a dead man! Toews, dead! Campbell-

Oshie: Dead! Bluto's right. Psychotic, but absolutely right. We gotta take these bastards. Now we could do it with conventional weapons, but that could take years and cost millions of lives. No, I think we have to go all out. I think that this situation absolutely requires a really physical and violent solution.

Bluto: And we're just the guys to do it. I have just one thing to you. Fuck. Chicago.

(Oshie and Backes stand up.)

Backes: Let's do it!

(Team rises, hurries out to the ice.)