There is a lot going right with this Blues playoff team (still getting used to using those words together), but I really think it starts from the top down. While I can't argue that TJ Oshie will one day rule this town or that Keith Tkachuk led this team on the ice last night, credit should also go to the ownership and management. As Brad Lee said, people are genuinely happy for these guys. Last night was not just about what the team they assembled did on the ice, it was also about management's commitment to the fans.

For those of us that were ready to break down the doors to Scottrade at 6:30pm exactly, we were greeted with a nice surprise as we forged through the turnstyles. At the entrance by the garage (where I always go after purchasing my Gametime from Clarence), Chris Kerber and Bruce Affleck were there greeting fans as they walked in. Intrigued by this, my mom (my season ticket partner and female hockey fan role model) and I walked a circuit of the Scottrade. At every entrance, there were broadcasters, Blues alums, or management talking with fans, signing autographs, and just being visible to the crowd.

We spoke with Peter McLoughlin who admitted that he had been pacing all day in anticipation of this game and really looked genuinely excited to be talking with fans. While I stealthily avoided the crowd around John Kelly and the potential for telling him that "Thank you! Thank you! Thank you!" is probably the worst announcer catch phrase ever, I noticed there was a huge crowd right near the main entrance. In the middle of the huge crowd was a huge man. Once I realized it was John Davidson, I knew what I had to do. I braved the crowd and ended up with this: 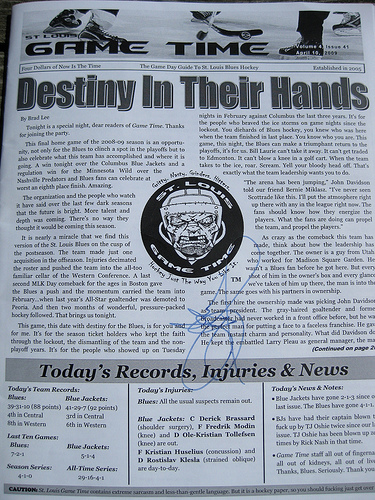 By the time we had finished walking around Scottrade and were ready to settle in to watch warm-ups, most of the management had left the concourse. Still, by the garage entrance, Larry Pleau was shaking the hand of every person coming in. I asked him about his wife's health and he said she's doing better and was at the game last night. Although I have had my ideological differences with some decisions Pleau has made in the past, it was great to see him interacting with the fans.

While not everyone got to get JD's signature or talk to one of the broadcasters, what's important is that this is just another example that the ownership and management of this team is dedicated to the fans. For anyone who stayed to hear JD speak after the players gave up their jerseys to the lucky fans, it was obvious that management realizes how important fan support is to this team and seems greatful for it, not just in the "lining my pockets with playoff revenue" way, either. The ovation he got from the diehards that stayed through all of the postgame madness shows that the fans appreciate management, too. It was a great night on and off the ice for Blues fans. Now if only Jarmo had been out there so I could thank him for those late first round steals.