The Blues return to the Stanley Cup Playoffs tonight with Game 1 in Vancouver.

If you've been reading this column, you know this team has been coming on hard since the beginning of February. They're hot and made such a tremendous push that eighth place wasn't good enough, so they grabbed sixth. Now that's the main storyline with these Blues: a team no one expected to be here, got hot and now they're here.

But over a long series (I'm guessing this thing could go seven games), there are hours and hours of broadcasts that will have to be filled. Intermission reports, pre-game shows, post-game shows. Be prepared to hear a lot about the following plots.

- The Canucks really wanted David Backes when they signed him to an offer sheet over the summer. And I bet Vancouver wishes the Blues hadn't matched the contract. Backes signed a three-year, $7.5 million contract offer as a restricted free agent. The Blues matched the offer in less than an hour.

The power forward had struggled somewhat last season and was limited to 13 goals and 31 total points. During the second half of the season as the Blues stumbled to another mediocre finish, Backes became a physical force with the Blues and showed a level of intensity many of his teammates didn't have. The Canucks and Blues both saw an emerging player with a strong will and an appetite for contact. Backes scored four goals in a convincing win over Detroit coming down the stretch. He finished with 31 on the season with 13 coming since March 6. So yeah, the Canucks probably wish he was playing for them.

- Hot goaltending can win a playoff series...but both teams have it. In the Blues' last 14 games of the season, Mason allowed more than three goals only twice. In that same span the team was 9-2-3. Mason earned the most Three Stars awards for the Blues this season and he didn't take over as the Blues' starting goaltender until the first week of February. Without Mason, the Blues don't play tonight.

Roberto Luongo is a an All-Star goaltender. He's one of the best in the league. He finished the season with a 33-13-7 record. He stopped 92 percent of the shots he faced and allowed just 2.34 goals a game. Last week the NHL named him the No. 1 star of the week. Mason was the third. I should probably point out that Luongo is human and can be beat. Back on March 26 the Blues did just that by winning 4-2. Bobby Lou allowed a highlight reel goal to rookie TJ Oshie that was voted goal of the year on NHL.com. If goaltending is equal, then something else will be the key for the Blues to win, right?

- Paul Kariya could return to the lineup. But no one knows when little No. 9 will be ready to play. It's kind of like a professional wrestling tag team match. The guys on the bill are beating the pretend crap out of each other. One team is on the ropes and will be pinned any second when suddenly..."Wait! IS THAT PAUL KARIYA'S MUSIC!!???!!?"

There's little doubt that a healthy Kariya would be a good thing for this team. Regardless of any debates over momentum, team chemistry and sitting a player who earned his way into the playoffs, the Blues could always use Kariya. In 11 games he had 15 points this season. He makes the power play better and gives more scoring depth. The question is, will he be cleared to practice and then play?

- Does Mats Sundin have enough left in the tank for a legitimate playoff run? The 38-year-old Swede waited until December to sign with Vancouver after a protracted dance with the New York Rangers. Sundin didn't return to Toronto, supposedly not because of money but a chance to win a Cup before he retires. And then he signed for big money for at the time a mediocre team.

Over his career, Sundin has scored more than a point a game during the regular season. This year he played 41 games and totaled just 28 points - by far his worst season statistically speaking and poor in comparison with his points per game played. If the Canucks win, Sundin will get a lot of praise. If they lose, he shoulders the blame. Congrats, big boy. 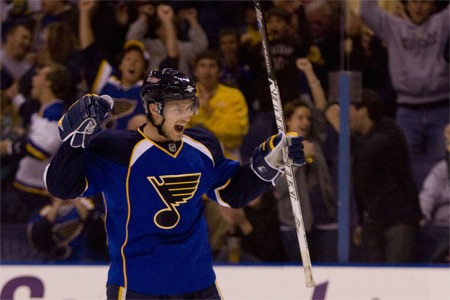 Scream if you're ready for the playoffs!

- Will the Blues have enough in the tank to compete in this series? Mason has played in every Blues game since the last week of January. The team has been in playoff mode almost that entire time. They knew every loss would potentially keep them from tonight. The Blues suddenly became a good road team as well as a force at home. They didn't give up, not for one minute. That's tiring.

But the Blues if they've shown anything is that they're resilient, well-conditioned and pretty young. Forget Jay McKee and Keith Tkachuk, the Blues are built on youth and speed. Their record in the second game of back-to-back nights was well over .500 this season. That isn't an accident.

I haven't even covered Pavol Demitra's poor play in the playoffs over his career, the contract push for the Sedin twins, Tkachuk's uneven play over his career in the playoffs or the fact that the last time the Blues played the Canucks in the playoffs, St. Louis was ahead 3-1 and blew it in seven games. But as they say, the playoffs are a new season. All the records and stats are wiped clean. The only thing that matters is what happens in this series starting tonight.